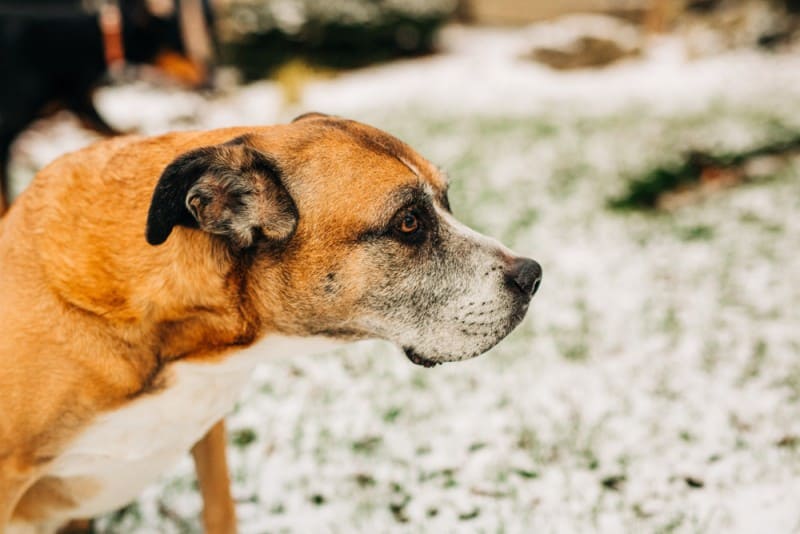 Both Boxers and Labradors have been a popular part of American households for quite some time. With both having unique strengths and personalities, what happens when you combine the two? You get the lab boxer mix affectionately known as the ‘Boxador,’ one of the most popular hybrid breeds in the US and a new choice for active parents with lots of children.

So what are Boxadors, and where do they come from?

Boxadors are a hybrid or crossbreed between a Boxer and Labrador Retriever. Also known as Boxerlabs and Laboxers, they’re one of the most popular mixed breeds in America.

Boxadors are considered an energetic breed that loves to socialize, interact, and play. They make excellent family pets that love being surrounded by people and are very protective of their caretakers.

They also get along with most pets in the house when provided with proper training and socialization. Boxadors are also great with children of all ages but need supervision with toddlers and young kids.

Most Boxadors are medium to large-sized dogs with athletic bodies. They generally on the higher end of the weight and height scale.

Although generally a healthy breed, Boxadors do tend to have a higher predisposition to suffering from diseases faced by both Labs and Boxers. But with some precautions, they are avoidable.

Here’s some history into how the Boxador breed came into being:

Although there’s no accurate record of when the first Boxadors came into existence, there are some reports that give a reasonably good estimate. The crossbreeding of Labradors and Boxers begin during the 1990s in the US.

Due to their friendly temperament and an exceptional sense of smell, Labradors have made their way into American hearts. They can be found in almost every kind of American household and are widely used by handicapped and anti-narcotic forces.

Meanwhile, Boxers were first introduced in the USA around 1904 after being brought from Germany and other parts of Europe. The breed proved highly valuable during both World Wars, acting as messengers, guards, attack dogs, and more. But it wasn’t until after the Second World War that the breed came into the spotlight.

Surprisingly, Boxers themselves are a hybrid between Bulldogs and the extinct Bullenbeissers. The breed was created as a hunting companion and guard dog. In Germany, the breed was also widely used in dogfighting. But with time, the breed has largely domesticated itself, becoming better mannered while still being just as energetic and playful.

Taking the best traits from both parents, Boxadors are a perfect combination of an excellent family dog that loves to play. Here’s a list describing the Boxador temperament and their personality traits:

Boxadorsarenearatop the list of the most active dogs in the world. Hyperactivity is a trait found in manyBoxadors. This is because both Labs and Boxers are extremely energetic dogs.

Labradors, especially the working breed, are trained to run long distances and be extraordinarily agile and energetic.

Boxers were widely used during both World Wars and had to run long distances carrying essential supplies. Thus, combining both these breeds results in a dog that’s extremely energetic and agile, especially if the Labrador parent is work bred.

Because these dogs possess such high energy levels, they’re always looking for something to do. They love doing anything that involves physical activity, such as walking, running, and fetch. That’s why a house with a big yard or garden is a perfect home for Boxadors.

Not only this, but these dogs love mental stimulation as well. They love playing hide and seek or puzzle games with their owners. You can also keep them busy with lots of toys to keep them engaged.

A bored Boxador can become a destructive one. That’s why most experts recommend taking Boxadors on a 30-45 minute walk twice a day to help them burn off their stored energy.

Just like Labradors, a Boxador’s temperament also tends to be extremely friendly, and they love being in the company of their family. They love receiving affection and appreciation from their owners and will often lay in your lap.

But like Boxers, these dogs take some time to bond with new people. Though once they start recognizing their owners, they become incredibly protective of them, including children. And because they’re so devoted to their family, they can get separation anxiety if left on their own for too long.

Most Boxadors take after their parents in height and weight, so they’re usually classified in the medium to large range. Here is the average weight and height for a Boxador:

But like all mixed breeds, Boxadors can also drastically vary in height and weight depending on the parents’ body profile. If both parents are tall and relatively heavy, the chances are that your Boxador will also be as tall and bulky and vice versa. Some Boxadors can even weigh up to 110lbs!

Also, by no means being does being in the higher weight range mean that your dog is at an optimal weight. For that, you need to examine their body condition further.

Since they’re a hybrid breed, there’s no saying what exact color your labrador may be. However, the most common colors seen in Boxadors are:

Most Boxadors are a combination of two or three different colors. They have a distinct black mask over their muzzle and eyes, similar to that of a Boxer. A single solid color is quite rare in this breed. However, it can pass on if the Labrador parent has stronger genes.

In terms of the coat, Boxadors usually take after their Boxer parent. They have a short and shiny straight coat that only sheds much lesser than that of Labradors. However, some Boxadors can have a medium to long coat that sheds quite frequently. Again, this depends on how strong the genes of the Labrador parent are.

Since most Boxadors have a short coat, they shed far less than the average dog, or even Labradors. However, they aren’t exactly hypoallergenic either. Most of the shedding occurs during the spring and autumn seasons, so it’s important to brush them more frequently during those months.

But otherwise, a good brush every week is good enough to keep your Boxador’s coat perfectly and keep your house clean! Also, since they’re very clean dogs, Boxador’s will regularly groom themselves.

You should brush their teeth at least twice a week and clip their nails twice a month. Cleaning their ears and the corners of their eyes with a wet cloth is also a good practice.

As with any mixed breed, Boxadors are also prone to certain health conditions that they inherit from both parents’ genes. To keep your Boxador’s health in check, regular vet visits, and proper knowledge before and after getting the dog can go a long way.

However, there’s good news too. Since both the Labrador and Boxer breeds are different, the inbreeding coefficient is quite low compared to other mixed breeds.

So for a hybrid breed to have the same health issues as their parents, they must have a pair of faulty genes, one from each parent. If the parents are widely unrelated, there’s a smallerchance that the resulting breed would develop the same health complications.

Despite that, both parents can have some common ancestors or some non-recessive gene that may significantly increase the risk of a lab boxer mix developing the same complications later on.

Here are some common health problems seen in Boxadors:

According to several studies, Boxers have some of the highest chances of getting cancer. A study by the University of Georgia shows that almost 40% of adult Boxers fall victim to cancer. Therefore, Boxadors are also at a higher risk of getting cancer of developing cancerous tumors later in their life.

Joint Dysplasia is a growth disorder that affects both Boxers and Labradors, so it’s also fairly common in Boxadors.

The disease can be excruciating and can require painkillers or even reconstructive surgery. If surgery doesn’t help, some dogs might also have to get euthanized if their movement is severely impaired.

Heart diseases are common in Boxers, specifically Boxer Cardiomyopathy, which can cause an irregular heartbeat or even sudden death in some dogs. Because it’s an inherited disease, the chances are that it can get passed on to Boxadors.

Retinal Dysplasia is a fairly common issue with Labradors. Although it’s non-life-threatening, it can become quite an issue as they are progressive and can cause problems like night blindness and tunnel vision later on.

An average lab boxer should be fed roughly 2000 calories or 4 to 5 cups of kibbles a day. But since Boxadors vary so much in size, it’s difficult to determine how much food they need daily, and your best bet is to consult with your veterinarian.

But apart from that, here are some great feeding tips for a lab boxer mix:

If you’re considering getting a Boxador, the first thing you should know is that they’re not beginner dogs. They require a high level of stimulation, which might be challenging to provide for someone who’s busy for most of their day or can’t continually provide them with the company.

But if you have made up your mind, you will have two options for getting a Boxador; buying or adoption. Boxadors are recognized by several institutions, including the American Canine Hybrid Club (ACHC), Dog Registry of America (DRA), and Designer Dogs Kennel Club (DDKC). Therefore, it’s highly likely that you can find one in an adoption center.

With adoption, not only are you helping an abandoned dog find a loving and caring home, but you’re also supporting society in general. Most adoption agencies also provide free of cost neutering and spaying services as well as trained dogs.

Buying from a breeder has the advantage of seeing the personality and physical traits of the parents. If you can find a trustworthy breeder, they’ll provide you with a complete pedigree of the pup and tests for diseases and health complications. However, finding a reliable breeder is neither easy nor cheap.

How long do Boxadors live?

Considering the average lifespan of Boxers and Labradors, a Boxador might live up to 9-12 years on average.

How much does a Boxador cost?

A Boxador puppy from a reliable breeder can cost between $300-$700 on average, not including things such as neutering or vaccinations.

ALL dogs have the potential to be dangerous. But with proper training and socialization, most Boxadors make excellent family pets.

Are Boxadors good with children?

Yes! Once your Boxador recognizes and accepts children as a part of their family, they love playing with them and naturally guard them against harm. However, you should always supervise any dog interacting with small children.