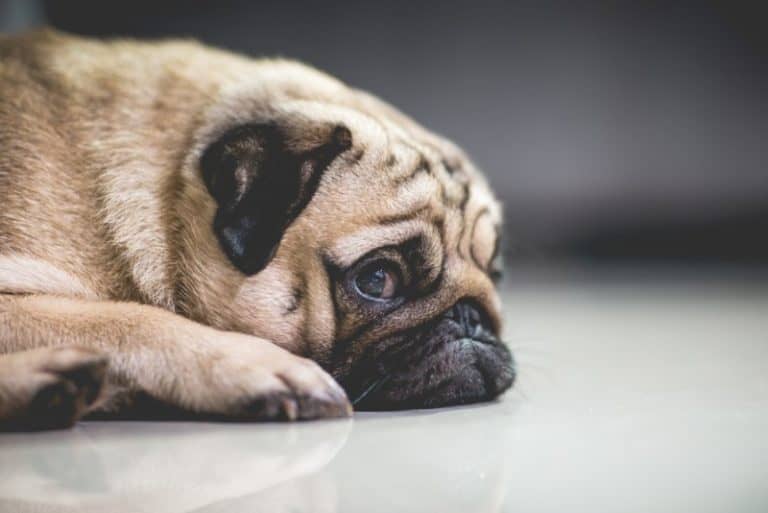 Most dog owners can admit to having suspicions of the presence of mental illness in their dogs. However, the majority of the population chooses to ignore these signs, but some curiosity always remains.

So, let’s answer it. Can dogs really be retarded or mentally challenged? Yes. The brain is an organ, and it is susceptible to abnormalities. Everything that has a brain can deal with mental challenges and disorders, including dogs.

In fact, dogs are highly likely to develop the same mental disorders as human beings.

But why is that so? And how do you recognize and treat these disorders?

Keep reading to find out!

Can dogs suffer from mental disorders?

When we talk about mental disorders in canines, most of us picture an aggressive dog lashing out at its owners and harming strangers. And while this may be true for a tiny proportion of the entire population of dogs, most mental disorders in dogs are so obscure that they go unnoticed.

However, a study by Emory University has discovered that the brain of a dog is surprisingly similar to that of a human. And since the human mind can develop so many mental disorders, so can the brain of a dog.

The problem is that most dog owners ignore major signs of mental illnesses as just episodes of behavioral changes. When in reality, these symptoms are hinting towards a much bigger problem that can significantly impact your dog’s quality of life.

Because mental illnesses are so discrete, even in humans, it’s difficult to diagnose someone with one. However, humans can share their emotions and describe what they’re feelings making it easier to identify these disorders.

Dogs, unfortunately, cannot. And that’s why the only way to recognize mental illnesses in dogs is to notice serious behavioral changes. It’s essential to keep an eye out for a sudden change in your dog’s normal behavior or the appearance of a new one.

What’s even more depressing is the fact that dogs suffer more extreme forms of mental disorders than humans. These disorders can significantly cut down their lifespan, but they never get diagnosed since the symptoms are so discrete, and most dogs don’t have an autopsy after passing away. This is another major reason to be more vigilant about the mental health of your dog.

You must know by now that a dog’s brain shares a resemblance to that of a human. But because of this similarity, dogs can develop the same mental disorders as humans.

To some extent, this is a good thing. That’s because each mental disorder causes the same symptoms in dogs that are seen when humans suffer from them. With some careful observation, you’ll be able to match these unusual behavioral changes to a specific disorder and treat it accordingly.

Here are some of the most common mental disorders in dogs, their symptoms, what causes them, and how you can treat them:

Although most dogs are bound to suffer from at least one type of anxiety, the most common one in separation anxiety. It mostly occurs when a dog is left on their own at home after you go to work. Because dogs are used to attention, they get incredibly anxious when they no longer see their owner. Since they don’t have any way of finding out if you’ll come back again, the dog can start panicking and act out in aggression.

The most common symptoms in dogs with separation anxiety include yelping, frantically barking, and crying. Another major sign of this disorder is destructive behavior. After you come home, you’ll often find chew marks around different objects in your house, including shoes, furniture, trash bins, etc.

Dogs can develop separation anxiety due to two major reasons; lack of training and lack of companions. If your dog receives attention day and night and isn’t used to spending time without you, they’ll quickly become very anxious in your absence.

Also, if you leave your dog entirely on their own in your house without any activity, they’ll quickly get bored and start getting anxious real fast.

To prevent separation anxiety, it’s best to start training your dog early. Make them learn your routine and teach them visual hints, such as picking up keys so they can become prepared when you’re leaving.

Always leave some toys with your dog and hide a few treats to keep them busy. And if you have a slightly hyperactive pup, make sure they have someone to accompany them like another family member or another pet.

Although depression seems like a disorder that only affects humans, it can happen to dogs as well. Depression in dogs is slightly different from what humans experience; however, it displays itself with almost the same symptoms. Noticing your dog’s behavior is the most straightforward method of diagnosing depression. But if you do, always consult your veterinarian afterward to rule out any other medical condition that might be causing the symptoms.

A dog that’s suffering from depression will appear lethargic and lazier than usual. They’ll be less interested in different activities and will probably lose their appetite, causing them to reject treats or water. If you weigh your dog regularly, you might also notice a sudden loss in weight. Excessive shedding and hair loss are also symptoms of depression in dogs.

One of the major causes of depression in dogs is the disruption of their routine. If your dog goes through a significant routine change, they might get depressed for some time. A dog might also suffer from depression after the loss of both human and canine companions.

Maintaining a steady routine for your dog is the best way to keeping depression at bay. If your pup is experiencing depression due to a loss of a companion, make sure to give them lots of love and affection. Take them out on walks and trips to the parks and do things that they love. Helping them socialize with other dogs and humans can help beat depression too.

Like humans, dogs can also develop social anxiety due to a lack of socialization while growing up. This is particularly common in dogs raised in puppy mills, stray dogs, and dogs that have suffered abuse from owners. Such dogs can become extremely anxious in the presence of humans and other dogs, and it often leads to aggression.

The most prevalent symptom in dogs with social anxiety is aggression. Whenever they’re placed in the company of humans and dogs, they’ll growl and snap at any human or dog they consider a threat. This is usually accompanied by drooling, shivering, and panting.

When dogs are raised in isolation since birth, they don’t develop the social skills required to behave normally around humans and dogs. Also, if dogs spend the majority of their life on the streets or grew up with an abusive owner, they’re likely to develop a phobia towards humans and other dogs. So when they’re placed in a social situation with unfamiliar faces, they’re likely to get very anxious and might become aggressive to defend themselves.

Probably the best treatment for social anxiety is to make your pup socialize from a very young age. Regularly introduce them to new people and dogs so they can learn essential social skills.

But if you have an adult dog that suffers from social anxiety, you’ll have to put in some extra effort to get rid of their social anxiety. Use positive reinforcement methods to teach them to be calmer and friendlier towards other people and dogs. If you think your dog’s behavior is threatening, consider talking to your veterinarian about tranquilizers.

PTSD is an incredibly common disorder in humans, but dogs, too, can suffer from it after an event that caused them severe trauma. Stray dogs are particularly susceptible to developing PTSD as most have past experiences of being attacked by other dogs and being abused by humans.

Most dogs that suffer from PTSD develop aggression and anxiety when they’re in the same environment where they got traumatized. In such situations, your dog will exhibit symptoms like shivering, aggressive behavior, barking, and might attempt to escape.

Whenever a dog is subject to extreme trauma, they can develop PTSD, and the memory will get embedded into their brain. So when they’re placed in the same environment, they fear that the same event might occur again. In response to this, they might become defensive and aggressive at the same time.

Luckily, treating PTSD isn’t too difficult for dogs. Talk to your veterinarian, and they’ll prescribe some medication to help calm them down. After the treatment is over, gradually build up their confidence by familiarizing them with that same environment.

Can dogs be autistic?

Autism is yet to be proven as a disorder in dogs. However, there’s promising research that shows a link between dogs with autism-like symptoms and a fragile x syndrome that might prove that autism does exist in dogs.

Can a dog become psychotic?

Contrary to popular belief, dogs rarely become psychotic due to natural causes. Usually, psychosis in canines occurs due to a disease like rabies, brain trauma, or due to drug overdose.

Do mental disorders affect the lifespan of dogs?

Yes, according to a study by Pennsylvania State University, there’s a strong correlation between anxious behavior in dogs and reduced lifespan.

Although dogs don’t become suicidal, they do experience depression after the loss of a companion. In such circumstances, they might reject food and water and can die as a result of a lack of nutrition or attention.

How do you make a dog happy?

Ensure that you give your dog fresh food, water, and bedding on their routine time. Play with your dog regularly, give them outdoor time, provide them with lots of toys. Make sure to take your dog to the vet regularly to rule out any health issues or concerns, and your dog will always remain happy and grateful.

2 thoughts on “Can Dogs Be Retarded? Or Mentally Challenged?”