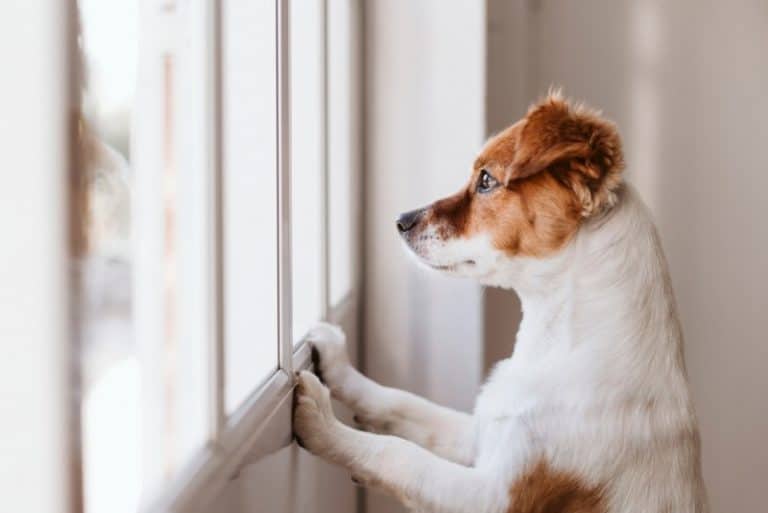 In the 2004 hit film, Shaun of the Dead, the Shaun character claimed that pub owner Big Al was untrustworthy because Al told him “dogs can’t look up”! Since then, social media users have been in a nearly decade’s long argument about whether dogs could look up. Most people believe dogs can look up and point to the fact that dogs raise their heads when they howl and have no issue looking “up” to snag a delicious treat somebody’s holding above their head.

Some think that this should put an end to the question of whether dogs can look up since they obviously can point their noses up in a vertical position and gaze adoringly at their owners’ faces. Or are we just assuming our beloved dogs are more “human” than they are?

Although dogs can raise their heads and point their noses upwards, they cannot make extreme movements with their necks like humans can. For example, humans can bend their necks at a 90-degree angle to gaze directly at the sky above them. Dogs must lie down or stand on their back legs to be able to look at the sky.

Wolf-like ancestors of dogs spent hundreds of millions of years with their noses constantly near the ground, searching for prey. They had no reason to evolve anatomical structures to help them look up. Barely a few thousand years old, domesticated dogs still retain a neck and spine structure similar to their ancestors. Also, a dog’s spine is horizontal, not vertical like the human spine.

Both canine and human spines have seven cervical vertebrae, but dogs have 13 mid-back vertebrae while humans have 12. Dogs have seven vertebrae comprising their lower back; humans have five. The difference in the number of vertebrae in their middle and lower spine prevents dogs from bending their necks at a 90-degree angle backward while standing on all four paws.

Other than the number of vertebrae, the canine and human spine contain discs to cushion vertebrae during spinal movements, facet joints between vertebrae to facilitate movement, muscles, and ligaments, as well as nerves extending into all parts of the body.

Why Do Dogs Look Up?

The most common reason domesticated dogs look up has to do with the behavior of their owners. Other than standing on their hind legs and partly looking up to snatch a treat from their owner’s hand or looking up at humans standing in front of them, dogs won’t bend their necks to see something. Instead, they rely on their spectacular peripheral vision to see what’s going on around them.

Humans have a visual field of up to 180 degrees. We can raise our eyes, lower our eyes and move our eyes side to side to see objects at the periphery without moving our head. However, a dog’s visual field is much larger than humans–up to 240 degrees! Dogs, like many other animals, can see movement and objects beyond their line of sight. So, dogs do not necessarily have to look up to see something a human could not see without looking up. Observe your dog sitting outside looking at the squirrels in the trees, the birds flying overhead, and the insects buzzing in the bushes. They will rapidly move their eyes around them to see what’s going on but won’t move their heads as much as humans do.

When Dogs Can’t Look Up: Neck and Spine Problems in Dogs

All dog breeds can look up to some degree. Smaller dogs tend to do it more readily than larger dogs simply because they are closer to the ground and have to look up to see their owners! If you notice your dog refusing to look up at you, whining when they look up as though they are in pain, or having problems walking or standing, this could indicate a medical condition affecting bones or muscles comprising their neck or spine.

If a human was diagnosed with intervertebral disc disease (IDD), a doctor might refer to it as a ruptured or herniated disc. Beagles, retrievers, German Shepherds, and dachshunds are especially prone to IDD due to breed genetics. The more purebred the dog, the more at risk the dog is for suffering IDD.

Signs of IDD include lack of appetite, yelping when picked up or moved, avoiding physical activity, and refusing to move their head. The cause of IDD in dogs is just like the cause of IDD in humans–degeneration of the discs between vertebrae. When these cushion-like discs start losing fluid and dehydrate, they cannot function effectively as shock absorbers. Vertebrae begin scrapping and rubbing against others as discs degenerate, producing pain and preventing normal spine and neck movement. Trauma may also cause premature development of IDD in dogs, such as getting hit by a car or falling from a height.

Treatment for IDD includes keeping the dog confined and inactive for two to three weeks and giving a veterinarian-prescribed pain medication as needed. In severe cases, dogs with IDD may require surgery if they experience numbness in the legs and difficulty walking.

Signs of Atlanto-axial malformation (AAM) in dogs involve neck instability, pain, and inability to hold the head up. Pekingese, Yorkshire terriers, Chihuahuas, and other smaller breeds of dogs are prone to AAM because a tiny portion of the second neck bone doesn’t always develop normally. In AMM, the dense part of the second neckbone has an abnormal shape that causes instability between the top bones of the neck and the dog’s skull. Severe AAM may cause partial paralysis if there is too much pressure on the dog’s spinal cord. Some dogs will need to wear a chest-to-chin neck brace so they can move their head without pain. Others may require surgery to reduce pressure on the spine.

Also called “canine wobbler syndrome” by veterinarians, cervical spondomyelopathy (CS) in dogs may interfere with their ability to look up and walk normally. Larger breeds are vulnerable to wobbler syndrome because of their size and weight. Dogs with possible cervical spondomyelopathy will have a wobbly, unsteady gait. They may walk with their hind legs too far apart while taking short, jerky steps with their front legs. Gait abnormalities and severe neck pain due to CS arises from certain neck bones compressing the spinal cord. More rarely, CS is an elongation of canine neck bones, i.e., bones separate from ligaments for unknown reasons. Diagnosing wobbler syndrome requires MRI scans to determine the extent of neck bone abnormalities. Treatment for CS involves surgical compression to reduce pain and remove pressure on the neck and spinal nerves.

COMS in canines causes pain when moving their head up or down, often resulting in constant scratching of their ears, nose, and face.Constantscratching is due to neuropathic pain resulting from an abnormally small skull that puts pressure on the brain. The dog’s inability to look up without suffering pain comes from severe pressure on the spinal cord by accumulating excess spinal fluid. COMS is mostly a genetic disease diagnosed in King Charles spaniels, Chihuahuas, Yorkshire Terriers, and Brussels Griffons. Some dogs with COMS may not exhibit clinical signs, so only an MRI would detect the condition. Treatment for COMS includes vet-prescribed medications to reduce pain and excess fluid, putting pressure on the spine.

Keep Your Dog Looking Up! Tips for Preventing Neck Problems

Avoid putting a chain or leather collar on your dog if you attach a leash to the collar. Use a size-appropriate harness when walking your dog with a leash. Dogs may lunge unexpectedly at wild animals they see, even if the animal is at a distance from the dog. If the collar’s force pressing against the dog’s neck is strong enough, the collar could cause hairline fractures in neck bones. Harnesses allow you to manage your dog on a leash without a collar pressing into the dog’s neck.

While your small or medium-size dog may enjoy jumping on and off furniture (especially when greeting you), it’s best to stop your dog from jumping off any piece of furniture. Even a footstool only a few inches off the ground could cause a neck injury if your dog makes a misstep when landing.

At the first sign of your dog having difficulty looking up, perform a cursory examination of the dog’s neck area. Look for wounds, bite marks, swelling, or skin irritations that may cause pain when the dog raises his head. If the symptoms continue, take the dog to your veterinarian for a more thorough examination.

The Meaning Behind 21 Strangest Dog Behaviors