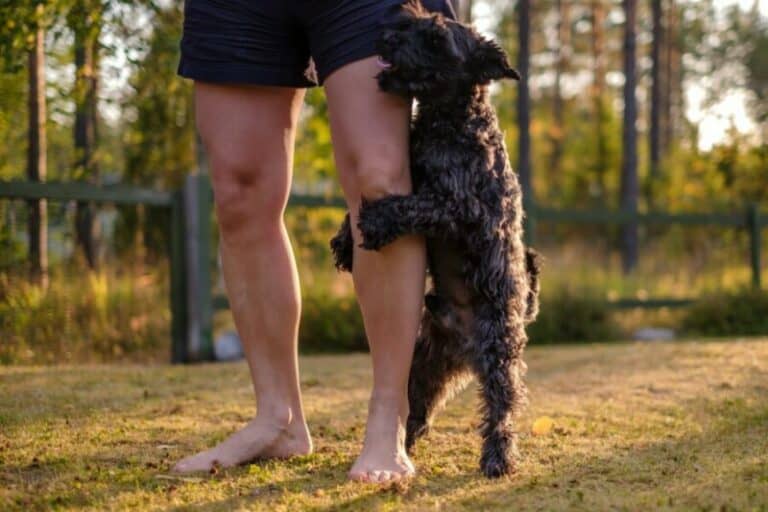 At times, our dogs do unusual things that make us think about whether they are attracted to us. It could be humping your leg or sniffing your privates that first brought the thought to your mind. While these behaviors may appear to have sexual intentions, dogs are not sexually attracted to humans.

There are various reasons why dogs cannot be sexually attracted to humans, such as reproductive isolation, pheromones, and species-specific differences. Additionally, attraction patterns also differ among dogs and humans. Keep reading to learn about dog sexual behaviors and more.

The urge to procreate is strong among all intelligent species of animals. It drives their survival and is responsible for the continuation of the species. Sexual drives are absent in puppyhood, but increase as the dog ages and reduces again in their senior years.

When puberty arrives, changes occur in the bodies of male and female dogs. They start to show an interest in the other sex and sexual behaviors at this stage. Male and female dogs also differ in their sexual drives. While male dogs desire to mate all year round, females experience seasonal heat cycles.

While young puppies do not experience the urge to reproduce, they still engage in mounting. Around five weeks of age, you might notice puppies mounting each other. Although puppies have no idea that the behavior is sexual, it is usually a way to assert dominance.

As male dogs age, testosterone levels increase and peak by five months of age. This is usually when behaviors like mounting and humping have a sexual nature. Around seven months of age, male dogs seek to mate and become attracted to the pheromones released by female dogs. Around one year of age, most male dogs successfully find a mate.

Female dogs experience the drive to mate at certain times throughout the year. The estrus (heat) cycles occur once every few months. Most female dogs experience their first heat cycle around six to twelve months. Small dog breeds generally mature quicker, while large breed dogs can take a year or more to reach sexual maturity. There is a wave of follicles in the dog’s ovaries and increased estrogen levels at the start of a heat cycle.

Heat cycles start with the “Proestrus” phase, where female dogs do not show any interest in mating. In fact, a male dog’s attempts to mate are usually met with aggression.

This is also when you will notice the vulva swelling and bloody discharge. While your dog will not welcome male dogs, her body produces pheromones that attract them. They are present in her urine and vaginal discharge.

Why Dogs Cannot Be Sexually Attracted To Humans

After discussing dog sexual behavior and puberty, we can move on to the reasons why your pet cannot be attracted to you. The main reasons are:

Reproductive isolation is an evolutionary phenomenon, which ensures that members of different species cannot mate with each other. An example could be a population of wolves separated by shifting continents. The two halves of the population evolve and develop their unique characteristics to adapt to the demands of their environment. When reconnected, these two wolves will not mate with each other. This is because they are two different species due to evolution.

Dogs and humans are very different from each other. Our DNA structure and mating rituals differ vastly from dogs’. It is not possible for dogs to experience arousal through interactions with a human.

We look very different from dogs since our genes dictate our appearance. While we have two arms and two legs, dogs have furry bodies and four legs. This difference in appearance is enough to ensure dogs do not feel attracted to humans. Humans and dogs also have different sets of chromosomes. Humans have 23 chromosomes, while dogs have 39. The differences between dogs and humans ensure that your pet does not feel attracted to you.

Pheromones are what cause attraction among humans and dogs. Humans secrete different pheromones than dogs. When in heat, female dogs secrete the pheromone Methyl p-hydroxybenzoate.

Reasons For Inappropriate Behavior With Humans

The first time you wondered if your dog is attracted to you was probably when they tried to hump your leg or sniff your privates. These behaviors may seem sexual to us, but do not indicate an attraction.

Inappropriate behavior dogs engage in is sniffing your private areas. It can be very embarrassing if your dog shoves his nose into your or a guest’s crotch without reservation. According to the American Kennel Club (AKC), this is mainly a form of greeting due to curiosity about changes.

Humans have sweat glands, specifically apocrine glands, which are located in the armpits and genital regions. When dogs sniff your crotch, it is to identify your scent. These glands release pheromones, which indicate your age, mood, and sex. Since a dog has difficulty reaching your armpits, they will sniff your privates instead.

If your dog is sniffing your privates more than usual, it could be because of changes. Humans who are menstruating, have recently had sexual intercourse, and have given birth secrete more pheromones. Dogs can smell these changes and are curious about why they smell differently.

Dogs’ acute sense of smell alerts them of various changes in the bodies of other animals as well. In the book How Dogs Think, Stanley Coren PhD., DSc., FRSC writes about how Australian Shepherds were trained to detect cows who were ovulating. It is not certain if dogs can detect when humans are ovulating, but they can definitely sense something different.

One of the most unusual and inappropriate things dogs do is mount or hump other animals, objects, and humans. They often latch onto the legs when engaging in this behavior. Even after neuter/spay surgery, most dogs still engage in this behavior. It is completely normal for dogs to have sexual desires. The difference is they do not have any social inhibitions or sense of boundaries like humans. While we regard sex as something private, dogs have no qualms about indulging their desires using humans and objects.

This behavior can seem very inappropriate to you. It is also embarrassing if your dog latches on to your friends or family. There are many reasons dogs mount, and it is not always a way to meet their sexual needs. Your dog could notice something you were completely unaware of when carrying out this behavior. Maybe you pet a dog of the opposite sex and forgot about it. While this behavior is normal, it can create problems for you and your pet.

Why Dogs Do It

If your dog engages in this behavior often, there are various reasons for it.

If your puppy is mounting and humping you or other pets, it could be due to over-excitement. Puppies have a lot of energy and get excited easily. The behavior isn’t sexual at this age, but more like chewing and biting.

Dogs that mount often could be in need of other activities and exercise. It is possible that they try to relieve excess energy by mounting and humping. While sexual desires also play a role, lack of exercise and other activities can worsen the behavior.

Your dog has various needs including attention, exercise, and sexual stimulation. When unmet, they can create issues for you, your family, and other pets. If your dog does not get enough attention or exercise, it can lead to excess mounting.

Dogs that engage in excess mounting could have an excess of hormones. When you neuter/spay your dog, these hormones automatically adjust.

How To Stop It

You cannot entirely stop a dog from mounting, humping, or sniffing your privates. However, you can try to reduce the frequency of the behavior by ensuring your dog gets enough exercise and attention.

It can be disconcerting and downright embarrassing when your dog does this to you. The best way to deal with it is to stay calm. Laughing or giving your dog any form of attention can encourage and reinforce the behavior. Well-trained dogs will stop when given commands. Have a solid command such as “No” or “Sit” that will get your dog to stop immediately.

Exercise and mental enrichment are the best way to keep your dog engaged. They can reduce the frequency of such behaviors.