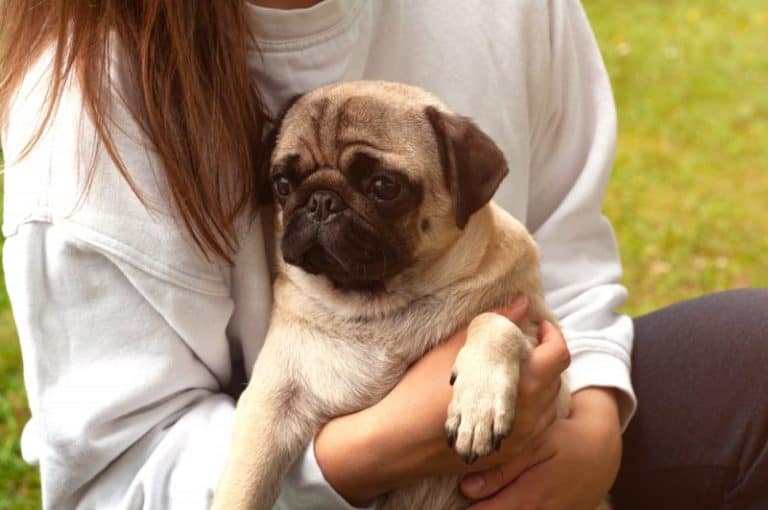 Does your dog yelp or whine when you pick it up? The reasons can vary from just being surprised to the dog being in pain. If your pet’s response remains the same, you’d be right to worry.

So, if you’re facing this issue, start by finding out its cause. In this article, we mention the following most common reasons a dog might yelp when you pick it up:

Let us look at the potential causes one by one:

It is Startled When Picked Up

This reason is more common for puppies that are unaccustomed to being handled by people. When a breeder doesn’t handle the pups in their care, the animals can have a hard time developing socialization skills. Therefore, they won’t know that being touched and cuddled is something they can look forward to.

If you have such a puppy on your hands, then work on them until they become comfortable with the act. Never surprise them by sneaking up on them. Don’t scoop up the puppy without warning. If you approach from the side, they will be able to see you coming. Once they do, speak their name to get their attention. Then, gently pick them up.

Keep the handling sessions short in the beginning. That way, the young puppy can learn being picked up isn’t a bad thing. You may also want to sit on a chair, so they don’t feel intimidated when they see you looming over them.

Dogs that have just been adopted may also react like this when picked up. As you would with a puppy, patiently get them used to your handling them.

It Finds the Way You Pick Them Up Painful

Another reason your dog yelps when you pick them up could be because its painful for them. You’ll know if they don’t behave this way when you pick them up gently. In households with kids, it is crucial that the little ones receive guidance on how to handle a dog. Let your kids know they should always move toward the dog from the side.

Additionally, have them practice while sitting down. This will prevent your child from accidentally dropping a wiggly pup. The Chihuahua breed produces small dogs. Being stepped on or dropped is one of the causes of death for these pets.

The right way of picking up most dogs is doing so with both hands. Place one hand on the dog’s rump and spread the other wide to support the chest. Make sure to support the dog’s underarms with your pointer finger and thumb.

The Dog Yelps in Excitement

Some dogs will cry out when picked up out of excitement. If you’re unsure whether your dog is yelping because they’re excited or scared, try reading their body language. Among the universal signs that canines show when happy are:

Here are some more signs you can look for:

A dog could get fearful when you pick it up. To confirm if that’s the case with your pet, see if they’re more likely to cry when you approach them quickly. Then, try doing so gradually. Is their reaction limited to when you pick them up forcefully? Be gentle when handling your pet.

If neither’s true, then your dog could require some positive reinforcement. Once they realize that you intend to cuddle them, they might grow out of this fear. The first thing would be that you make your presence known. Then, kneel so that you’re at the same level as your dog. Pick them with both hands.

Here are some other things to remember:

Your Dog is Suffering from Joint or Muscle Problems

Yet another reason your dog might yelp when picked up could be because it is suffering from joint or muscle problems. If those muscles become strained during the process, they can cause pain. Your dog’s joint problems can either be degenerative or developmental.

Degenerative issues are the result of aging or from overuse. A common example of such an issue would be osteoarthritis. Your pet spends its life playing, running, and jumping. Such use can wear down the muscles of a dog’s body.

Developmental problems, on the other hand, are the result of a dog’s hereditary predisposition. An example would be hip dysplasia. This hereditary condition is common among most large-sized breeds, including German Shepherds and Great Danes.

You can determine if this is the case with your pet by monitoring their behavior whenever they move. Usually, dogs that have joint conditions also exhibit other symptoms. The following movements will cause them to yelp in pain too:

If you find your dog is reluctant to jump or finds laying down difficult, then they could be suffering from either joint/muscle issue. Make a vet appointment as soon as you can.

Your Dog Could Have Spinal Issues

Muscles or joints aren’t the only parts that can ache. Some dogs could be suffering from spinal issues. One common spot that can bring about sudden pain is the mid spine area and neck. The chronic pain they feel could be making them cry out. Every time you pick them up, the impingement of their nerves or the spinal cord may produce sharp pain.

Do you often find your dog knuckling over on their front leg? Is their pain becoming more severe? Both are indications of pressure on the spinal cord in the neck. A vet visit may include an MRI in this situation. In extreme cases, the results may show a ruptured intervertebral disk. That disk is the root of the pressure on the dog’s spinal cord. It will require surgery for correction.

Recovering from such a surgery may take up to two weeks or more. However, not operating on the dog can leave them permanently disabled.

Your Dog Suffers from Cramps

We’ve already discussed chronic muscular conditions. However, temporary problems are also problems due to overexertion of the same muscles. In such situations, your dog could experience cramps and muscle spasms. Determining if that’s true for your pet is simple. Look for other common symptoms of this condition, such as:

To ensure that your dog doesn’t overwork their muscles, allow them to take small breaks during play or exercise sessions. Also, make sure your dog can get to drinking water in such situations. It will keep them from overheating.

Some Signs That Show Your Dog Could Be In Pain

It is not easy to determine if your dog is in pain. However, it could be why they yelp each time you pick them up. So, closely observe them for the symptoms we have mentioned above. For instance, dogs with spinal issues may be twitchy or present tremors as symptoms. Those with chronic muscular pain may also find lying down difficult.

Aside from these indications, here are some more that you can look for:

A Loss of Appetite

One way you can determine a dog’s wellbeing is to monitor their eating habits. When in pain, most animals won’t be in a mood to eat. If the severity of their condition increases, they may eventually lose their appetite altogether. So, if your dog’s yelping and has stopped eating, take them to the vet immediately.

Having Difficulties in Breathing

When the pain becomes too much for a dog to handle, they will exhibit breathing difficulties too. Check to see if they continue to pant even in cold weather. Since dogs pant to prevent their bodies from becoming overheated, this can be a clear sign that’s something may be wrong. Take yours in for a medical check-up.

A Discharge from the Eyes or Eye Redness

Both these conditions can be indications of pain. Get your pet checked. That said, if they have an eye infection, your dog won’t just yelp when picked up. They’ll do so constantly. And they could have a fever too.

What To Do If Your Dog Yelps When Picked Up

Most of the time, if they’ve begun yelping suddenly, it can be because of a recent injury. In other cases, there may be other symptoms along with the yelping that can clue you in.

In any case, if you cannot pinpoint the root of their behavior, taking them to a vet may be the best option. That way, you will receive expert advice that’s tailored towards your pet. We’d recommend going to one with a better understanding of the breed of your dog. In addition, if you think a vet isn’t taking your concerns seriously, locate a different one who does. Speak up if they aren’t performing a full examination and your dog’s case warrants one. Finally, only trust your pet’s wellbeing to a reputable expert.

In conclusion, never assume that a dog that yelps, when you pick them up, is behaving normally — just as chewing on their tail isn’t! Sure, they will bark sometimes and you can also train them to not bark their head off. And yes, puppies will whine when young. However, the vocalization of yelping is, more often than not, a cry of pain. Those yelps could be your dog’s way of communicating that they’re in injured, sick or have some other health condition.