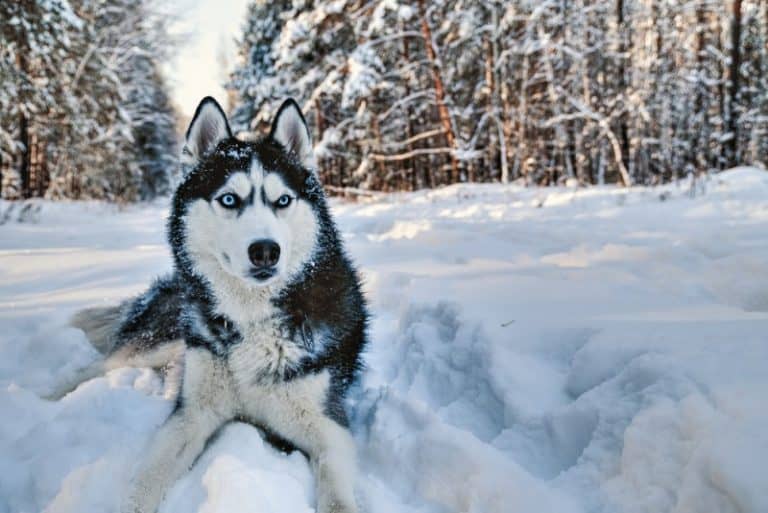 However, they’re not exactly for everyone. Fulfilling the needs of a husky isn’t an easy task and requires a lot of dedication and patience.

So what are the best alternatives to a husky? Are there dogs that look like wolves but are easier to care for?

Absolutely! We’ve compiled a list of 13 of our favorite dogs that look like huskies but vary in size, color, and personality.

So if you’re ready, let’s get into it!

Malamutes are basically huskies with a lot more fur and a much more muscular physique. These are the supercharged version of huskies!

While Malamutes are also sled-bearing dogs, they’re typically used for much heavier loads and long distances. Their two-inch long coat and brawny build help them drag tons of weight in harsh arctic climates without breaking a sweat.

These dogs are very affectionate and friendly, but they’re also super-energetic and require lots of exercise daily to prevent them from becoming destructive. They’re also a bit different from huskies in appearance; their coat color is slightly muted, and their mask isn’t as prominent.

Czechoslovakian Wolfdogs are a relatively new hybrid breed and have a striking resemblance to the ordinary wolf.

The breed is a cross between the German Shepherd and Carpathian Wolf and was specifically created to aid the armed forces of Czechoslovakia in various tasks.

These dogs resemble Carpathian Wolves more than Huskies and have the temperament of German Shepherds. They’re very independent, active, and social, but require consistent training since their birth to become obedient adults.

The fluffy, ice white Samoyed is one of the most distinguishable wolf breeds in the world. In comparison to Huskies, these dogs have a much more ‘social’ and chirpy personality as they tend to bark a lot.

They descend from the Samoyedic people of Siberia, hence the name Samoyeds. They also make excellent family pets and are great with kids. Unlike Huskies, these dogs only need a daily walk to stay happy and will gladly spend the rest of the day playing indoors.

Samoyeds are also natural hunters and make excellent trekking and hiking companions. However, they do suffer from quite a few hereditary conditions, such as diabetes and kidney diseases.

Tamaskans are a relatively rare breed that recently got recognized by AKC in 2013. While these dogs have a similar appearance to wild wolves, they have the same personality and temperament as Huskies.

These dogs are super-energetic, intelligent, vocal, and highly social and are a perfect match for families with lots of members. They’re very easy to train and do great with children.

Tamaskans are larger than huskies, and their coat is usually a combination of black-grey, red-grey, and wolf-grey. Although the exact origins of this breed are unknown, they are believed to be descendants of Huskies, Malamutes, and German Shepherds.

The Swedish Vallhund looks like a corgi trapped in a husky’s skin. They have a long body and short legs like Corgis, but the same wolfish face as Huskies, even though they have no relation to either of them.

But like any breed on this list, they’re work dogs used for herding and have lots of energy in them. Their coat color usually shares the same palette as wild wolves. They’re also very social and love entertaining their people.

If you can regularly get them involved in dog sports and high-intensity activities and provide them lots of attention and praise, these dogs will be the perfect choice for you.

American Eskimos are super-lively dogs with a curious mind and a fondness for attention. The ideal environment for these dogs is a house filled with people they love. They enjoy entertaining and accompanying their family members everywhere they go.

While these dogs have similar facial features as Huskies, they’re a member of the Spitz family, and so are smaller. The most prominent feature of Eskimos is its fluffy coat, which is as white as snow.

These dogs require lots of physical and mental stimulation to stay happy. Not being the center of attention doesn’t suit them, and they’ll become bored and destructive if they’re needs aren’t met.

Akita’s have a history of being excellent guard dogs and esteemed hunters. Their loyalty and fearlessness make them excellent watchdogs, but they’re also very affectionate and loving towards their owners once properly accustomed.

Although Akitas are larger and almost twice as heavier as Huskies, they don’t need as much exercise on a daily basis. But one thing they do resemble Huskies in is their vocal tendency. Whatever the situation, these dogs will make sure they’re heard one way or the other!

Since these dogs have a very protective nature, they can be challenging to train. They require early socialization to become welcoming towards strangers, but even then, it might take some time to suppress their guardian tendencies.

Kugshas are work-bred dogs with a history that’s shrouded in mystery. They’re much more physically capable than Huskies, having a brawnier physique and strong legs.

Although the exact origins of this breed are unknown, their wolf-like appearance indicates that they’re descendants of Malamutes and Huskies. They have a big head, triangular ears, a long body, and a balanced body.

These dogs have a very independent and active personality, with a high prey drive making them excellent hunting dogs. They require vigorous training from an early age, though they do develop a very close relationship with their master once they’ve been trained.

The Sarloos Wolfdog is another husky lookalike on our list that’s a direct descendant of the German Shepherd and European Wolf. Created by Leendert Saarloos in the 1930s, the dog is very similar in appearance and personality to an actual wolf.

They’re smart and strong-willed dogs that pack tons of energy and stamina. While they’re not particularly aggressive, it is advised to keep them in a house without children due to their predatory nature.

Saarloos Wolfdogs make great hunting dogs and hiking companions because of their muscular physique. However, they do need rigorous training and need to bond with their owners from an early age to become dutiful and obedient adults.

The Utonogan breed is a relatively new breed that has been created by combining the gene pool of three of the most loved wolf dogs; Malamutes, German Shepherds, and Siberian Huskies.

Although these dogs might physically resemble wild wolves, they’re very tame and calm tempered. They do great with kids and love playing and interacting with their owners. However, they are better suited to open spaces or houses with big backyards and might become anxious in small spaces like apartments.

Shikoku dogs originate from the Japanese island of Shikoku, where they served as boar hunters and trackers. These dogs look similar to the Atika Inu breed but are smaller and more social than the former.

Shikoku are very social dogs that develop a close bond with their master. They have a powerful prey drive, especially towards smaller creatures, so it’s best to remove any small pet from your house before they turn into a target.

These dogs are naturally active and require a lot of physical activity to stay healthy. You also need to interact and engage with them frequently; otherwise, they can become destructive due to boredom.

Alaskan Klee Kais are direct descendants of both Siberian and Alaskan Huskies, hence the uncanny resemblance. These dogs are medium-sized Huskies but are a little on the shyer and more affectionate side.

This breed was created to become a better companion than Huskies. That’s why these dogs develop a very close bond with their owners but are a bit skittish towards strangers and new people.

However, they’re still quite energetic and playful. They love to interact with their family and are very vocal about their emotions. They make excellent family pets provided they’ve been adequately socialized since puppyhood.

Keeshonds are all about people. They thrive with loving families and are eager to engage in every single activity where they can participate along with their master.

While these dogs are as loving and affectionate as Huskies, they don’t have a very high exercise requirement or prey drive. This makes them excellent pets for families with small children. However, you should prepare yourself for a lot of howling and barking!

These dogs have a much denser coat than Huskies and prefer living in colder climates. Also, they need quite a bit of maintenance to manage all the fur on their bodies. Another unusual thing about this breed is that they’re very welcoming towards strangers, unlike most wolfdogs in this list.

While Huskies are officially recognized by the American Kennel Club and are legal throughout the world, most breeds on this list aren’t.

The majority breeds on the list are either share a direct ancestry with wild wolves or share a very closely related gene pool with them. Because of these, these dogs often have a feral temperament and a high prey drive, which could cause them to act out.

Therefore, many of these breeds are subject to strict laws and regulations in different states and countries. A few states have even illegalized some of these dogs and will heavily fine anyone who’s caught having one in their custody.

Should You Get Wolf Dogs?

Each breed has a different lineage and shares a distinct personality and temperament. While some of the smaller dogs on this list have been domesticated through crossbreeding, some breeds are purposefully bred to have a primitive personality by direct breeding with wild wolves.

For instance, Keeshonds are very loving and affectionate dogs, and do great with families and especially kids. They’re great for owners who have young children and need a dog who’s an excellent companion and protector.

However, the Czech Wolfdog not only looks like a wolf but also behaves like one. They’ve been obtained by directly breeding with a wolf, so they have dangerous predatory instincts. Therefore, these dogs need a very high level and a strict training regime to become obedient.

And while they can become quite loyal, they are aggressive towards strangers, children, or anything they consider a threat or prey. Due to this reason, these dogs are also banned in many states due to their wild temperament.

So the decision applies to you, whether you want a working dog, a family pet, or a loyal companion. In each case, do proper research on the personality of your breed of choice, their requirements, and the laws regarding that particular breed in your state or country.

Both Siberian Huskies and Alaskan Huskies share a very close resemblance to arctic wolves. While the Czech Wolfdog resembles Eurasian wolves the most.

Are huskies challenging to train?

Huskies can be quite difficult to train due to their independent, stubborn, and strong-willed personality. They’re not recommended for new dog owners or someone who can’t keep up with their needs.

Yes, Huskies have a very high and strong prey drive and will attack or even kill cats, squirrels, rabbits, and even some small toy dogs.

While Huskies are part wolves, the majority of their gene pool comes from dogs and not wild wolves. For comparison, they share just as many wolf genes as bulldogs or poodles.

Who should not get a husky?

Huskies are very independent, require a high amount of exercise, are quite vocal, and are dangerous to small pets. Anyone who cannot meet these demands probably shouldn’t get a Husky.