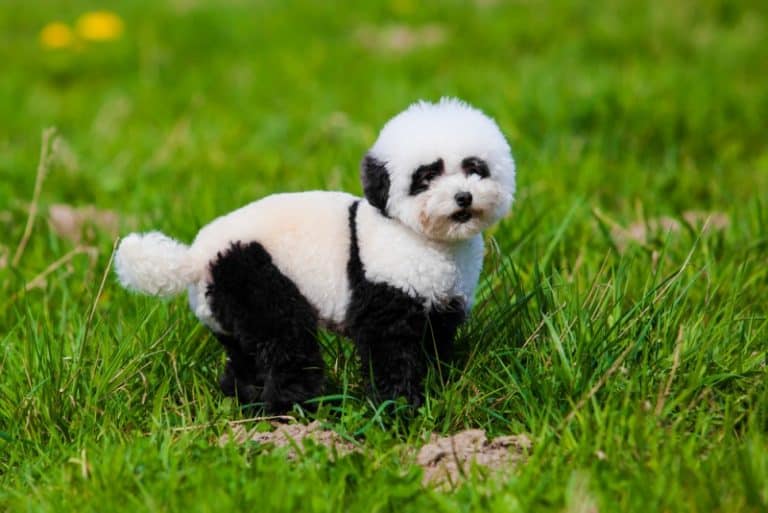 Have you heard of the Panda Dog yet? If you have, you may be wondering if it’s an actual dog breed, and more importantly, where you can get one.

Well, Dog Lovers Digest is here to bring some much-needed information about panda-monium out there. And to do that, we will be talking about three different types of canines—two of them being purebreds while the third is a hybrid. Read on for more.

The Tale of the Tibetan Mastiff

At first, the conversation of the bear-like Tibetan Mastiff began to trend in the canine world. Dog owners went mad for the so-called Panda Dog. It all started in Asia — as most newfangled trends do.

If you’ve ever come across the Tibetan Mastiff, you know they resemble super-sized teddy bears. But that isn’t the only animal that the Mastiff resembles. Some dog lovers also think that the thick pelt of hair around their neck makes them look leonine. Indeed, in the wild, its hulking body is massive enough for the Mastiff to take on beasts like:

As its name implies, the Tibetan Mastiff is originally from Asian. Areas, where its ancestors would protect lives and livestock, include:

Usually, you’ll see black, red, and bluish-grey specimens from the Mastiff breed. However, owing to the demand, breeders have managed to produce them in a gold shade too. The gold is pale enough to seem white. Moreover, some individual Tibetan Mastiffs bear large white markings also.

Understandably, those markings are the origin of the Panda Dog craze. Soon, Mastiff owners began painting their pooches in the bi-colored pattern that we see on real pandas.

The Case of the Chow Chow

Predictably, people who shared their homes with canine companions besides Tibetan Mastiffs wanted to get in on the fun too. And, that’s where the second breed enters our story about dogs that look like pandas.

More specifically, we refer to the Chow Chow. Another dog that’s often called the Puffy Lion canine, this one hails from northern China. You’ll find Chow Chows in various colors, including:

In addition to the single shade members, they can also be multicolored. However, most organizations consider the patchy coat Chow Chows to be outside the breed standard.

The Chow Chow breed is ancient. However, its recent notoriety is due to the trend surrounding Panda Dogs.

Similar to the Tibetan Mastiff, the cuddly Chow Chow resembles a teddy bear. They have squishy, square faces and fluffy manes, making them resemble pandas and bears.

Furthermore, Chow Chow owners decided that those similarities weren’t enough. Consequently, we’re witnessing a slew of very Panda-like Chow canines after their owners took to clipping, grooming, and even dyeing them in Panda shades.

The Mystery of the Maltese-Poodle

The next canine character in our story about dogs that look like pandas is a hybrid. The dog’s owners dubbed him Columbo, after a quirky detective from the TV series of the same name. Columbo is a Maltese-poodle mix and a native of a town in Tokyo.

Aggressive and vocal, Columbo hadn’t had an easy life. His previous owner had abandoned him. Roaming on the streets, Columbo gained a stiff back leg and lost his canine teeth — so he won’t bite anyone. That’s how his new owner, a beautician and pet shop owner, found him. Even when he tried to intimidate, Kensuke wasn’t ready to give up on this droopy-eyed pooch.

Once he found his forever home, Columbo started to thaw. Kensuke waited only that long before picking up the shears and began styling Columbo’s hair. As a result of the extreme doggie makeover, the dog started looking more like a panda than ever. Kensuke applied safe and non-toxic canine-specific black hair color to some of Columbo’s fur. The remaining parts were dyed white. At last, the Maltese-poodle mix’s coat began resembling the striking and ever-recognizable patterning we see in pandas.

Technically, Panda Dogs are canine. However, their decidedly ursine appearance is something of an attraction for many first-time dog owners. In China, particularly, many of them are lining up outside a pet store in Sichuan Province. Because that’s where they know they’ll find the Panda Pups!

The owner of that newly famous pet shop owner is HsinCh’en. Through his attempts, Panda Dog lovers can now buy Chow Chow pups that look like their favorite animal. Pet stores in other parts of the country are also adopting this technique. If you’re visiting, you can get a Panda Dog in under two hours.

Unlike the ordinary-looking Chow Chows — well, as ordinary as they can look — a Panda Dog costs you more. However, the bragging rights and the envious looks seem to be worth it. Or, so says Ch’en.

A perfect panda-esque mane might take time to achieve. But according to the pioneer pet store trendsetter, Ch’en, it doesn’t harm the pooch. Neither is it burdensome for the Chow Chows who undergo the grooming. He claims that he neither uses harmful chemicals nor subject the pets to any cruelty.

While Ch’en might be all for the Panda Dog treatment, many animal activists aren’t! They warn dog owners against the toxic effects that dyeing can have on their pets. There could be some truth to that. Just two years ago, the People for the Ethical Treatment of Animals’ highlighting of a case proved it so. Its owners put human hair dyes on the dog’s body, which resulted in severe burns.

Like PETA, we’d urge you to protect your pooch from unnatural beauty procedures like that. Any new trend that can harm your fur baby’s health and well-being isn’t worth it.

Sadly, the purple dye case isn’t the only one. Four years ago, pet shops began selling dogs with dyed fur in China that made them look like miniature tigers. The even worse part of this story is that these tiger dogs don’t last longer than a week. The dye’s toxicity makes sure of that!

How do I look after my Panda Dog?

Firstly, don’t but your Panda Dog from a disreputable breeder. As we mentioned above, they could be using human hair dye to produce the panda-like patterning. The resulting canine could develop toxicity-related health issues.

Secondly, it might look like a panda, but you’d still be bringing home a fur baby. Therefore, care for it just as you would for any canine. Don’t forget about them once this trend loses steam!

Thirdly, caring for a canine companion involves providing them with the breed- and age-specific training. Some breeds must receive socialization training as puppies. If they don’t get it, those dogs will never get along with other pets. Others require obedience classes. Not getting them might produce a wilful canine who doesn’t listen to you at all. Therefore, confirm what the breeder has to say on the subject.

Similarly, don’t let a puppy get away with bad behavior, like biting or barking. Unchecked aggression can cause problems for you and your family later on.

Fourthly, all dogs require some form of exercise — physical and mental. Make sure that your Panda Dog gets it too. Real pandas can live without such exertions. Your dog, though, would start to develop health issues without it! Whether you take them out for walks or buy them puzzles, do right by your Panda pooches.

How long does the Panda Dog grooming last for?

Generally, the bear-like look that turns dogs into pandas lasts for six weeks. After that, you should bring your bundle of fluff back to the groomer. Once, there, the professionals will give your pet a touchup. Also, the amount of grooming that makes a Panda Dog makes it a pricey pooch. When you add in the touchups, the cost rises! Hence, be certain of the kind of dog you want to adopt.

What breeds are available as Panda Dogs?

Currently, you can adopt the following breeds and mixes in the adorable-looking Panda Dog form:

In conclusion, the Panda Dog isn’t a new breed that was just discovered. So, any panda-esque canines that you find out there are either the result of grooming — such as the Bichon Fraise or a product of both grooming and breeding, such as the pale gold Chow Chows. In the end, they’re just pooches. Love them, and they’ll be yours for life!