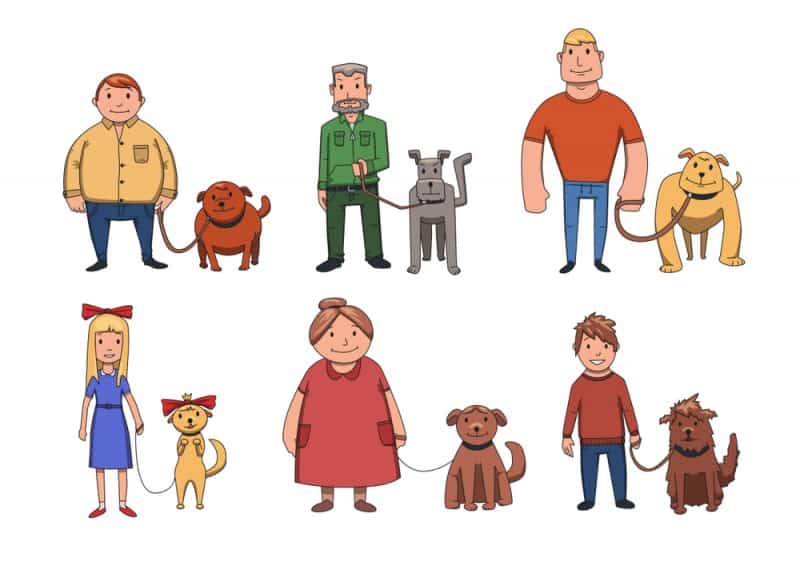 A British publishing house hired Gethings, a photographer. To celebrate canines, he was to produce their portraits along with that of their owners. What was special about these photographs was that the two looked alike!

After the portraits found success, they were turned into a memory game. Called, Do You Look Like Your Dog?, it consists of 25 owners paired with their canine companions. To win, a player must match the right dog with the right owner. But was this a one time thing? Or, is there any truth in the theory that our pets resemble us?

What Scientific Evidence Favors the Theory?

Actually, there are multiple studies that say that dogs look similar to their owners. Back in 2004, researchers submitted an article to the journal Psychological Science. In it, you can see how easily the participants could match photos of dogs to the people they belonged. They achieved this by merely focusing on the physical traits of the two.

Then, in 2015, another article became part of the journal Anthrozoös. With that, we saw that the owners and dogs possess similar-looking eyes! Below, we’ll be discussing whether a potential dog owner:

Keep reading for the answers. In the meantime, it is safe to say that dogs that look like their owners are a common sight. In a given park, you might see a bearded hipster with the same hairstyle as their pup. Or, you may come across a pugnacious-looking male accompanied by a bulldog. Atheltic-figured women may well choose an Afghan hound — both having glossy long flowing locks. And so on.

The Accuracy of the Theory

According to a psychologist from the University of California in San Diego, it is easy to figure out which dog belongs to a particular person. When they visited multiple dog parks in the area, they took photographs of both the owners and their pooches.

Then, he got some participants to help match the two. The answers were reasonably accurate. Even when a bulldog owner doesn’t sport a squashed-up face as their pet does, something gives them away. Most likely, it’s the eyes that provide the hint. When you cover the eyes, participants would guess with less accuracy.

In any case, such experiments produce similar results in many cases.

Why Would I Want a Pup That Looks Like Me?

Is it an instinct that goes skin-deep? Could it be because of the intense bond we form with our four-legged furry baby? Are we simply going about choosing dogs the way we do our two-legged partners?

One reason why we might do this is because of the allure of familiarity. We know the faces of our family members. Looking at them comforts us. We also recognize our own facial features. Therefore, when we go looking for a pup, we reach for one that looks the most like us.

Additionally, evolution ensured that when we search for a mate, we go looking for people who are genetically more compatible with us. This imprint spills over onto the other choices we make, such as car choice. Studies show owners-to-be with square jaws prefer vehicles with more brutish fenders. So, we apply the same principle when adding a canine member to our family. A pooch that looks more like ourself brings us comfort. Does that also mean that your car and dog look like each other? There’s evidence that says so!

Psychologists think our choice of puppy doppelgangers is also about mutual dependency. Your fur baby depends on you for food. But they also don’t really care about your physical appearance. You, though, would be more relaxed if you can spot a face that looks like yours. In simple words, it comforts you that there are two of you against the world. And isn’t that what having a family is all about? You may share a nose with your siblings or have the same eyes. In the end, it’s all about seeing the common image that those features project.

The Kind of Dog You’re Most Likely to Adopt

When Itchpet included 2,000 dog and cat owners in their study, they wanted to know the same thing. How many pets shared the most striking resemblances with their humans. Their study found some very interesting answers.

If you identify as man, you’re more likely to adopt a dog that resembles you in some manner! What’s more, about 16% of Itchpet’s participants could even see that resemblance in the eyes of their pets. Another 10% think they can see they and their pet have the same nose. And then there were the 11% who think they behave just like their furry friends do. However, it isn’t just the owners themselves who think this way. People bring up said resemblance to twenty-four percent of the participating owners.

The research gave us another valuable nugget of information. In terms of personality traits, the two — dog and owner — also mirror each other. So, for example, if you’re outgoing and have an active lifestyle, you’ll pick a canine companion who behaves similarly. On the flip side, owners with more negative personality traits shared their couches with anxious or aggressive pooches.

Likewise, women who keep longer hair will go for dogs with similarly long and floppy ears. Does the Vizsla appeal to you? And heavier people will have fatter or large-sized pooches.

Admittedly, these findings only work for pure-breds and not in case of mongrels.

But is the comfort we seek limited to our physical attributes? Or, do we also, albeit unknowingly bring home a dog that shares our personality traits? Normally, we become friends with people with whom we have certain commonalities. The same is true for our canine soulmates and us.

The relationship you share with your fur baby is special. To you, they aren’t simply a pet. Instead, time brings you close enough that you start loving them like they’re family or a companion. Therefore, it shouldn’t surprise you to discover that their personality mirrors yours.

Researchers for a paper in the Journal of Research in Personality found that to be true. They began by surveying 1,600 dogs from 50 different breeds and their owners. To remove any differences due to gender, they chose an equal number of male and female dogs. Additionally, by selecting dogs of various ages, they also removed any age bias.

The human participants had to complete a questionnaire. The questions on it were about the personalities of both the dogs and their owners. There were also some questions on the behavioral history of the dogs. The results from that article show that dog personalities change with age just as ours do. In other words, the pooch that you bring home from a shelter wouldn’t remain the same after 10 years!

What’s more, some personality changes also happen because of the lifestyle and experiences a dog has. Hence, if your pup is misbehaving at the dog park, you share the blame for it. Knowing that can help vets predict if a dog might display biting behavior in the future. It can also help them determine if your fur baby will develop any chronic life conditions.

Is Your Behavior Influencing Your Pooch’s?

To some, the idea of a dog having a personality might seem ridiculous. Can we expect human-like traits, such as extroversion, to be present in dogs? Yes, if you imagine the simple way in which they’d manifest. As extroverts, people are more outgoing. They like meeting new people. In a dog, extroversion would be how they behave towards other dogs or strangers. If your pooch is aggressive or friendly towards strangers, they could be exhibiting the doggy form of the trait.

Canine experts use the dog version of the Big Five personality questionnaire. The said survey measures someone’s personality in the following dimensions:

For dogs, though, those measures would be demonstrations of laziness, remaining cold and aloof, or hiding behind the owner’s legs when company’s around.

But the question isn’t whether your pooch has a personality. Instead, we ask if yours is affecting your dog’s or not. Research shows that owners have personality profiles similar to their pets. In fact, yours is probably closer to that of your dogs than your spouse’s or a friend’s! Logically, this would make sense since canine lifespans are longer as compared to how long the average marriage lasts.

What’s more, the research proves that this correlation wasn’t affected by time. In other words, the dog wasn’t copying the owner or ingratiating itself. The likeness was the reason why a person picked a dog in the first place. In other words, people could be choosing canine companions that will match their lifestyles. And, as time goes by, their personalities sort of meld with each other. Sharing a lifestyle with someone can do that — so why not your dog?

A Dog’s Personality and Its Effect on Training

Pup school is just like elementary school used to be. Every student had a unique personality. There were class clowns but bullies too. Shy kids and outspoken students both were present in class. In short, the same personality dynamics are functioning in pup school too.

Trainers will tell you that some dogs are easier to put through the paces than others are. For instance, pooches with a happy and excitable disposition, pick up the lessons quickly. Those who are fearful or anxious, on the other hand, can try a trainer’s patience.

Aside from their personality quirks, a dog’s age also plays an important part in trainability. For example, puppyhood is the best age for such lessons. Even middle-aged dogs will pick up tricks much faster. After that, though, they can become set in their ways — if you have grandparents, you’d know how that works!

That said, training puppies isn’t an easy job. Maintaining their attention can be challenging. However, they grasp concepts much more quickly until they turn six. After that, a trainer’s job becomes much much harder. Hence, the advice from dog experts about providing training early on, such as to these wolf-like dogs, makes sense.

What Role Does Breed Play?

Although it seems logical that a dog’s breed would influence its personality, there aren’t many studies on the subject. In one, where over 50 canine breeds took part, it was clear that some breeds were more well known than others were. So, certain breeds of dogs have found their way into the homes of dog homes far more frequently than others. Consequently, we know their personality traits better while others remain unknown. That’s one of the reasons it is difficult to form theories about breeds and personality.

Even so, we do know that a dog’s behavioral tendencies are easily obvious. Not only that, those tendencies come from within their DNA. Purebred dogs are not only less anxious, they are also less likely to be aggressive. The same is true for spayed or neutered pooches. But it is possible for dogs who are prone to being excitable, fearful, or aggressive to learn. Provided that you get them into obedience classes and socialization training early on, you can shape their personalities for the better.

Superficially, the theory that owners and their pooches look alike may seem funny. But if you probe, you may find it awe-inspiring. Just imagine how this relationship first emerged. About 30,000 years ago, our ancestors and wolf-like creatures were hunting together. With time, the latter walked farther away from their lupine lineage.

Today, we are breeding these creatures in our own image. Is it a surprise that the intensity of the bond we share with our canine companions is only increasing? Dog owners will swear that their fur baby just knows when they’re sad. That their dog consoles them during such times. Others tell of pooches entering burning buildings to save their human companions. Simply put, they are man’s best friends, so it shouldn’t surprise us if they resemble us in some way!