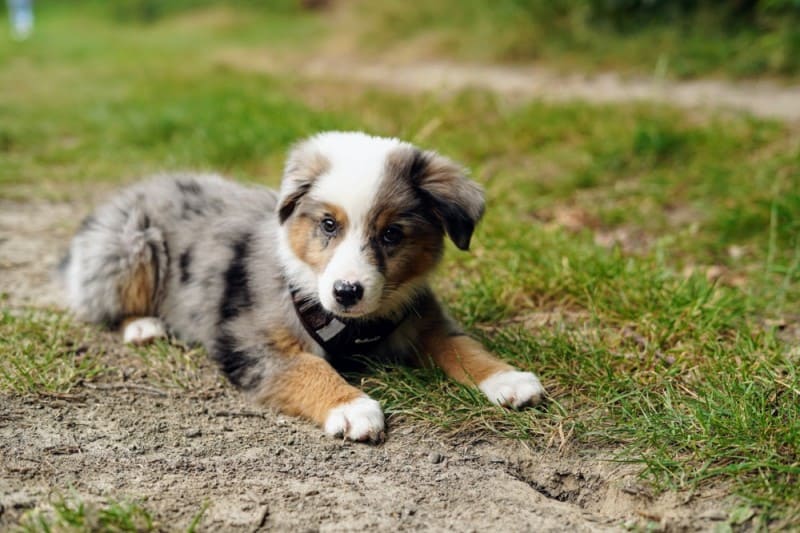 If you want an athletic working dog that isn’t enormous enough to qualify as a roommate, consider the Mini Australian Shepherd. These unique dogs are small, compact, and fluffy with the work ethic of a much larger dog breed. This bread is a miniature version of the Australian shepherd that is rapidly growing in popularity.

The miniature Australian shepherd displays characteristics similar to their bigger counterparts, without needing ample space. You can easily fit these petite pooches in your apartment without having to sacrifice any open area. These mini Aussie shepherds are small in size, but they are also incredibly intelligent, curious, and easy to train.

You’ve spent endless hours on Google trying to accumulate a list of must-haves for your next pet-dog. Here are some of the qualities you may have narrowed down:

Several dog breeds fall into one or more of these categories. But the miniature Australian Shepherd exceeds all expectations! They are cute and fluffy bundles of pure-joy with the athletic abilities of working dogs. In addition to this, they are easy to train and eager to learn, perform, and obey.

If you’re determined to buy a miniature Australian shepherd, this guide will help you make the right decision.

Everything You Need to Know

Miniature Australian Shepherds are a fairly new breed. In the 1960s, specialist breeders in USA worked together to breed compact-sized Australian Shepherds to create a smaller version selectively. The breeders successfully produced a new line of dogs that was miniature but kept all of the breed’s desirable features and characteristics.

The full-grown mini Australian shepherds can weigh between 17 to 40 pounds and stand 14 to 18 inches tall. Their compact size makes them ideal for anyone living in a small-house, provided that you give them ample activity and exercise.

There is a noticeable variation in size between males and females. They are real-time snapshots of their regular size, big brothers and sisters! The male miniature Australian shepherd’s height is often between 13 – 18 inches. They are longer than they are tall and weigh between 19 – 40 pounds. Female Miniature Australian Shepherds are slightly smaller in size, standing at 12 – 17 inches tall, and weighing lesser than their male counterparts.

Fortunately, miniature Australian Shepherds don’t require extensive and exhaustive grooming routines. They shed once or twice a year during spring and fall because of their double coat. They aren’t frequent shredders and clean-up after themselves. During the shedding season, mini German shepherds may require regular grooming and brushing. As a standard routine, brushing can be done one-a-week. You might find yourself detangling mats now and then, but aside from that, miniature Australian shepherds require minimal upkeep when it comes to grooming.

Miniature Australian Shepherds come in a wide-range of colors including red, red merle, black and blue merle. You might notice that white and tan spots are common in this breed. They have dense double coats that require semi-regular brushing, but no extra work. Their undercoat is thick and soft while their outer coat is long, water resistant, and straight or wavy.

Given the tremendous success of the breeding program, the miniature Australian shepherd has the same zeal and eagerness to learn as the standard size breed. These adorable dogs are terrific at agility sports, obedience, herding, fly-ball, and other games that involve quick thinking and decision making. The key is to begin training early and take advantage of your puppy’s intellect. You must keep a consistent hand through the training process and use positive reinforcement tactics. Motivate your puppy to pick up new commands and tricks by rewarding their success with applaud and treats. Stay consistent, and your mini German shepherd will be jumping and catching Frisbees in no time!

This breed loves to please their owners. Therefore, they actively contribute to the effectiveness of any training method. No puppy is immune to regard and praise from their human-parent. On the other hand, aggressive training is not only inefficient but cruel for dogs. Being harsh, punishing or yelling at your canine won’t get you far. Thankfully, negative reinforcement and harsh training methods are a thing of the past. Let’s be clear; that’s abuse and not training. No dog deserves to suffer through that process.

Miniature Australian Shepherds are the epitome of happy-go-lucky dogs. They love to perform, play, and learn new tricks. They are affectionate, loyal, and will happily protect you and your family without hesitation. These dogs are also great companions for young children.

Miniature Australian Shepherds always have a ‘happy’ look on their faces. They are an athletic breed that loves socializing and playtime. They are friendly and affectionate and mingle well with strangers. These dogs enjoy being with their human pack and can get clingy if left alone for extended periods. They are also defensive and will quickly inform you when someone unfamiliar has showed-up on the front door. There are countless stories of Miniature Australian Shepherds attacking burglars to rescue their owners.

A Miniature Australian Shepherd has recently become popular on the podcast and mini-series “Dirty John”. Cash, the mini Aussie, leaped into action when his owner was attacked with a knife by a family member. Throughout the altercation, Cash continued to bite and attack the person’s leg until his owner could free herself. These dogs may be little, but they’re protective and fierce!

You live in a small apartment? No problem! You own a lot of land and a big yard? Even better! These dogs are highly adaptable in any urban setting. Their compact size makes them a perfect resident in any household. They also thrive in homes with a lot of open space to run and play. They can fit in anywhere and are happy to be loved and cared for. If you live in a small apartment where they can’t run freely, then you might need to take them out for regular exercise.

Protip: Always keep an eye on your dog’s weight and provide them portion-controlled meals throughout the day.

As one would expect, Miniature Australian Shepherds share similar health problems as the standard Australian Shepherds. Common health conditions include cataracts, hip dysplasia, epilepsy, and spinal defects. Though the unique merle color is highly sought after by eager dog owners, the gene responsible for the coloration also causes common hearing and vision conditions.

Is the Miniature Australian Shepherd Right For You?

Miniature Australian Shepherds are a unique breed. They are full of fun energy, eager to please, and love to protect their owners! Mini Aussies remain loyal to you and can be your best friend for life. They are a sturdy breed with few health conditions. If you want a puppy that will be excited about playtime and cuddle with you on the couch while you’re binge-watching Netflix, then the miniature Australian shepherd is perfect for you!