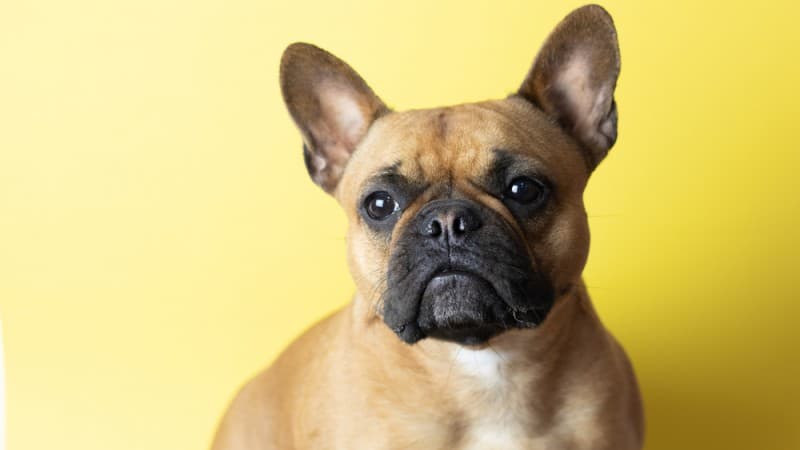 Mini bulldog’s have mushy faces, bat-like ears, and irresistible personalities! If you decide to adopt one, be prepared for their adorable puppy-dog-eyes to overwhelm you.

Whether you have admired these dogs from afar, or want to own one, there’s no denying the affection these pint-size puppies provide. In this guide, we’ll cover everything you need to know about the little French bulldog.

The Mini Bulldog is a designer dog – an intentional crossbreed between the Pug and the English bulldog. Bulldog’s are amicable companion dogs originally developed to guard, bait and control bulls. On the other hand, Pug’s are small, good-humored dogs popular in royal courts since 1600 BC. This hybrid is a small, playful canine that doesn’t require a massive commitment to grooming.

The modern bulldog breed descends from the dogs of Molosssians; an ancient tribe in Greece. Phoenician traders spread these dogs across the ancient world. However, England outlawed blood-sports and bull-baiting in 1835, leaving bulldog’s unemployed. As a result, breeds began developing a compact version and transformed their purpose from sporting dogs to companion dogs.

The Miniature bulldog also received a title, the Bouledogue Francais, and became recognized as a separate breed. The French name is a combination of the words dogue (mastiff or molosser) and boule (bull). These affectionate dogs were popular in society and highly sought-after by honorable women and Persian prostitutes alike.

Honestly, can you resist? According to the American Kennel Club ranking, the small but mighty miniature bulldog claims the sixth spot as the most popular dog breed. This breed’s popularity continues to rise over the past few years.

AKC suggests that one of the mini bulldog’s ancestors is considered to be the English bulldog. Moreover, this dog breed was initially called Boule-Dog Francais. The English felt that calling an English canine by a French name was purely comical, and they weren’t pleased. Hence, they began referring to this breed as mini bulldogs.

Fortunately, some breeders were dedicated to keeping the French bulldog’s signature bat ear.

On the subject of the dog’s history, it may surprise you that they almost lost their unique bat ears. According to the AKC, the mini bulldog may have lost the bat ear if American dog aficionados didn’t object.

The idea was to replace the bat ear with a rose ear, resulting in a compact version of the English bulldog. Furthermore, this controversy sparked the formation of the French Bull Dog Club of America.

The Mini bulldogs are a fun-loving breed by nature. They are affectionate and friendly with strangers and other pets. This breed doesn’t have high-energy levels and aren’t the most active. However, they enjoy playtime and spending time with their human family.

They’d be equally happy to lie on the couch and nap for hours!

The miniature bulldog is a cross between two separate breeds and displays a combination of characteristics from both breeds. Depending on the breeding technique, these dogs inherit different traits from either parent. For example, the Pug has a big personality for being a compact-sized dog and loves being around children. Bulldogs are friendly, playful and patient, also recognized for their ability to fit in with children, household pets and neighborhood dogs. As is true with all breeds, we recommend early socialization and training to control problem behaviors. Take charge of the impressionable puppy days and start training!

Miniature bulldogs are great for young families. They make superb companions for single dog-owners and families with young children alike. Not only is their appearance irresistible, but their behavior with children is fantastic. If you’re considering adopting a dog for your family, a mini bulldog is the best option. However, they’ll need constant supervision around other canines.

According to the American Kennel Club, these tiny puppies need to be watched and supervised in the company of powerful, athletic dogs. There’s a possibility that they make plenty of other pup friends, but they require extra attention in such scenarios. Therefore, it’s better to be safe than sorry.

At maturity, the Mini Bulldog weighs between 25 and 45 pounds. Breeding plays a massive role in determining the size of this dog breed.

Miniature Bulldog puppies are tiny when they are born. Though, they grow up to be 15 to 16 inches taller. The average litter size for the mini bulldog is about four to five puppies and is true with all dog breed. We strongly recommended that you start your Miniature bulldog with socialization and training in the early stages of their puppyhood. These little puppies are as fragile as they are cute. Therefore, ensure to be gentle with them and supervise any kids playing with these puppies. Accidents can always happen, after all.

Your mini bulldog will soon be your new best friend. This most important aspect of choosing the dog that’s ideal for you is their life expectancy. While some dog breeds are known to have longer lives, others have a shorter life expectancy. Therefore, knowing which suits your family is crucial. The average lifespan for the Mini Bulldog is between 9 and 15 years, though some live longer. These years would be the best of your life (until you get another pet, that is).

Don’t you like to bathe your dog every day? No problem!

Dogs often get themselves dirty, along with creating a mess in your home. One foul step and suddenly, you’re sitting on a couch full of dog hair. Fortunately, that’s not the case with a miniature bulldog. Not only do these dogs shed seasonally, but they don’t require anything beyond occasional grooming. The grooming requirements are uncomplicated due to their short stature, and smooth coat. You don’t have to bathe them frequently except once every few months. Unless the canine gets into something smelly or messy, bathing isn’t needed.

Moreover, additional bathing can be necessary only if they develop skin allergies. In that case, we recommend frequent washing with anti-allergic shampoos. Brush their short coat once-a-week with a slicker or bristle brush and grooming glove to remove dead hair. This will also help circulate the dog’s natural body oils.

Lastly, dogs with shortened muzzles and small mouths are likely to develop dental problems; therefore, dental hygiene should be given priority.

Mini bulldogs have a quite barking level, so you won’t have to fret about being disrupted. Sometimes, its music to people’s ears, but most folks are aware of how annoying incessant barking can be. Luckily, that’s not so much of a problem when it comes to miniature bulldogs. Their barking level is low, meaning you don’t need to sacrifice your peace when you bring one of these dogs home. However, they’ll alert their owners to stranger danger.

Our experts have established miniature bulldogs aren’t barkers, but they communicate in other ways. They use a complex system of yips, yawns, and gargles to convey an illusion of their own language. Sometimes they will sing along with their owner in the car. They are super affectionate and love to convey their thoughts and emotions!

They love to play, and are incredibly affectionate with their human family. If you prefer a lazy day on the couch binge-watching Netflix with the occasional play break, miniature bulldog can be your new best friend. Additionally, they are often quite sensitive. They don’t respond well to shouting and will end up moping around in response.as

Patience is key while training your mini bulldog. Miniature bulldogs are intelligent, but curbing their stubbornness requires adequate training time. This implies that their humans-parents need to be patient. As long as you provide them plenty of training, they’ll be keen to please you. Therefore, showing just how intelligent they are.

If you live by the water, you’ll need to provide them with life jackets. A dog that’s not good at swimming? It has to be a joke! Although you may think all canines enjoy dipping their paws in the water, miniature bulldogs don’t. According to Veterinary Pet Insurance, it’s crucial to take caution with these dogs when near water. They have a high risk of drowning due to their skinny, short legs, and short-snout respiratory issues.

They’re not good travelers, either

If you’re traveling by airplane, it’s best to leave your mini bulldog behind. This breed’s short-snout doesn’t only cause problems in the water. On the other hand, this lovable and sometimes problematic feature also causes trouble way up in the sky. They have a weak system; therefore, certain circumstances like change in temperature or temperature can collapse the airway. So, if you absolutely must bring your mini bulldog on a flight, ensure to take preventative measures. Furthermore, discuss preparation care and in-flight needs with your doctor before the trip.

Mini bulldogs need help when it comes to their breeding.

Because of how they’re built, artificial insemination is often carried out to breed a litter. The male is often unable to penetrate the female bulldog. Furthermore, almost all miniature bulldogs need to have c-sections. Partially to their compact-sized bodies and other stressors concerned with delivering a litter of pups. Because this dog breed is easily stressed, it’s best to spare the mother from a potentially fatal birth.

Recognition by the American kennel club

How to Train Dogs?

At first, dog training can seem pretty daunting, especially if you’re a first-time dog owner. The fact is that training your dog is a massive project. However, if you take small steps every day, you will find the task to be far less overwhelming. Here is some guidance to help get you started:

Unless you plan to keep your puppy outdoors -and some of us do, but it’s not recommended--you’ll need to teach your puppy where to excrete. Hence, house-training (also called potty-training or housebreaking) is one of the first things you need to work on with your puppy. Crate training can be a helpful part of the entire training process. This includes house training as well as several other areas of training:

Every puppy needs to learn to walk on a leash. That said, most places have leash laws, but there will be moments when keeping your puppy on a leash is for his safety. Learn how to introduce your dog to the leash, and then teach them how to walk properly on the leash. You can be beside them on a bike. A leash walk teaches your puppy not to lunge or pull when on the leash, making the experience enjoyable for both you and your pup.

How to Socialize Dogs and Puppies

Socialization means training your dog to accept unfamiliar people, animals, and different places by exposing them to these things. Socialized dogs are less likely to develop problem behaviors and are more welcomed by others. Furthermore, socialization can help prevent the development of various fears and phobias.

Bottom line: Socializing your dog or puppy will make them a happier, better-behaved dog.

There are basic dog training commands and tricks that every dog should know. These include: come, speak, stay, drop it, back up, etc. Basic commands give your puppy structure. In addition, they can help you resolve common dog behavior problems and will help keep them safe.