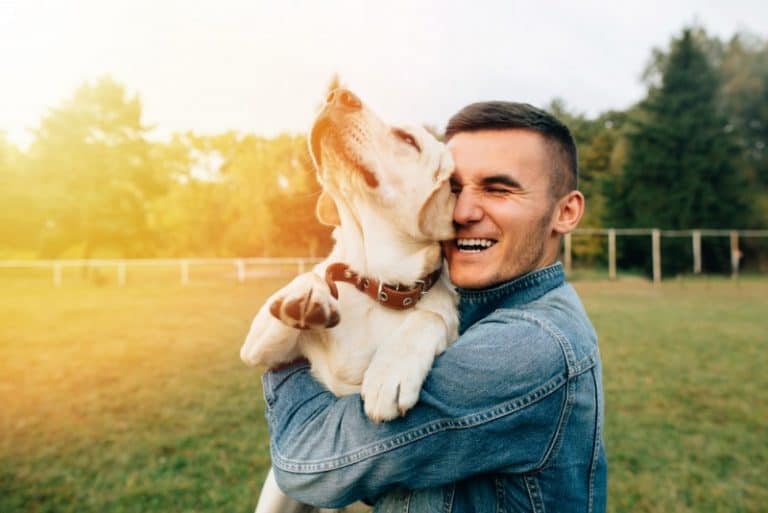 Can Dogs Get Rabies from Eating a Squirrel Infected with Rabies?

One of the first questions dog owners ask veterinarians after catching their dog eating a squirrel is, “Can my dog contract rabies from an infected squirrel”?

The answer is no. And the reason why involves the small size of squirrels and their incredibly rapid metabolism. For example, if a rabid animal bites a squirrel but does not kill it, that squirrel will die within hours of the rabies infection. That’s why rats, mice, chipmunks, and other palm-sized animals rarely contract and spread rabies. Essentially, the virus kills them before they have a chance of infecting other animals.

The rabies virus is not transmissible via unbroken skin, feces, or blood. The primary way a rabid animal infects another animal is by biting them. When an animal’s bloodstream encounters the saliva or brain tissue of another animal infected with rabies, they will likely contract the infection as well.

Also, rabies is not an air-borne disease. The virus can only survive a few seconds in the open air. Additionally, rabid animals that have been dead for 24 to 48 hours will no longer harbor live rabies viruses.

So, can a dog contract rabies from licking or eating a dead squirrel? Although possible, it is highly unlikely. The best way to ease your mind is to have your dog tested for rabies at the veterinarians.

My Dog Killed a Squirrel! Why Do Dogs Kill Squirrels and Sometimes Eat Them?

Millions of years ago, your dog’s ancestors werewolf-like carnivores prowling their territories at night, searching for warm-blood animals to kill and eat. Although your Labrador or Border Collie may greet everybody with tail wags, licks, and excited whines, they still carry a strong instinct to hunt, kill and eat small animals. Some dog breeds “hunt” more aggressively than other dog breeds, especially terriers, hounds, and spitzes.

Don’t be alarmed if you catch your well-fed dog catching and eating a squirrel. It’s got nothing to do with what you feed your dog. It’s just in their nature!

What Should Dog Owners Worry About If Their Dog Ate a Dead Squirrel?

If you know the squirrel was dead before your dog decided to take a bite of it, you might want to ask your neighbors if they recently put out rodent poisoning. Rodenticides are toxic chemicals in the form of attractive-smelling pellets or tunnel boxes coated with poison. When ingested by squirrels, mice, or rats, rodent poisoning causes death within hours by disrupting rodents’ nervous and circulatory systems. If you suspect your dog has eaten any rodent killed by poison, take them to the vet immediately.

In most cases of medium to large dogs consuming poisoned squirrel flesh, the dog may suffer from vomiting, diarrhea, and fatigue for one or two days but ultimately recover. Smaller dogs may require emergency vet attention involving supportive treatment for dehydration and respiratory problems. Signs of possible rodent poisoning in dogs include:

A veterinarian may administer activated charcoal or pump the dog’s stomach to counteract a rodenticide poisoning. Treatment depends on how much dead squirrel a dog ingested, the dog’s size and weight, and the severity of symptoms.

Can Dogs Get Worms from Eating a Live or Dead Squirrel?

Unfortunately, yes. Roundworms and coccidiosis are the most common parasitic infections dogs can get from eating squirrels. More specifically, it’s the roundworm larvae using squirrels as hosts that a dog can consume. Once roundworm eggs are inside a dog’s stomach, they will grow into mature roundworms and target the dog’s intestines. After attaching themselves to the lining of a dog’s intestines, roundworms will feed off nutrients produced by the digestive system.

Unlike tapeworms that are often visible as tiny, white wriggling specks in dog poop, roundworms are not visible, and they rarely move when expelled in feces. Many dogs live with a roundworm infestation and never show symptoms. A severe roundworm infection will cause weight loss, diarrhea, vomiting, and weakness. The only way to know for sure if your dog is roundworm-free is to take the dog to the vet and have his poop examined for roundworms. If your dog does have roundworms, deworming medication can easily treat the infestation.

Coccidiosis is the name of a gastrointestinal infection caused by one of four different kinds of coccidia protozoa. A microscopic parasite that initially matures in the intestinal lining, coccidia usually doesn’t cause healthy adult dogs’ symptoms. It can still cause severe diarrhea, vomiting, dehydration, and stomach pain in puppies and older dogs with chronic conditions. If your dog ate a squirrel, your vet might perform a whole host of tests to rule out common infections. Coccidiosis is diagnosed using a “fecal flotation” test that can detect protozoa under a microscope.

In addition to eating squirrels, dogs can pick up coccidiosis from ingesting soil or animal feces containing coccidia protozoa. A hardy parasite that is highly resistant to heat, cold, and other extreme environmental conditions, coccidia protozoa are known to survive for weeks and months in animals, feces, and soil.

My Dog Killed a Squirrel and the Squirrel Bit Him!

Squirrels have strong, sharp front teeth designed to crack tree nuts. If a squirrel bites your dog and breaks the skin, clean the wound thoroughly with an antiseptic solution to prevent infection from setting in. Apply antimicrobial ointment to the wound several times a day until the wound develops a scab. Keep an eye on the bite for signs of infection such as redness, swelling, and failure to heal properly. A veterinarian should treat deep, puncture-like squirrel bites. The wound may need a stitch or two if it is deep enough. Puncture wounds also require more intensive cleaning than surface wounds.

In most cases of a squirrel biting a dog, the squirrel often sinks its teeth in a dog’s nose or lip. When the bite is on a furry part of the dog, you should remove the fur around the wound with a small pair of scissors. Cut the coat down to the skin as close as possible to make it easier to clean the wound and keep it clean.

Can Dogs Get Leptospirosis from Eating a Squirrel?

Ground squirrels can transmit a bacterial infection called leptospirosis to dogs that contact an infected squirrel’s urine. When a dog chases, captures and kills a squirrel, that squirrel could release urine infected with leptospirosis bacteria.

Although rare in dogs, a leptospirosis infection can cause vomiting, fever, dehydration, and convulsions. Veterinary treatment involves hospitalizing the dog, administering fluids, and eliminating the bacteria with a regimen of strong antibiotics.

Can Dogs Get Lyme Disease from Eating Squirrels?

Squirrels spend most of their time in tree-dense areas where ticks thrive. In some areas of the U.S., ticks carry the bacteria responsible for Lyme disease. If a dog eats a squirrel infected with Lyme disease, that dog could easily get infected by ingesting the infected squirrel’s blood.

Signs of Lyme disease in dogs include:

Untreated Lyme disease can lead to kidney and heart failure. Fortunately, Lyme disease is detectable by testing the dog’s blood and urine for antibodies. Two tests are needed to accurately diagnose Lyme disease in dogs: the Quant C6 and C6. Live antibodies are detectable for up to five weeks after the initial infection. Urinalysis (Quant C6 test) will determine whether the dog requires a 30-day regimen of antibiotics.

The best way to prevent ticks (and Lyme disease) from making your dog sick is to give your dog monthly tick and flea preventatives available from your veterinarian.