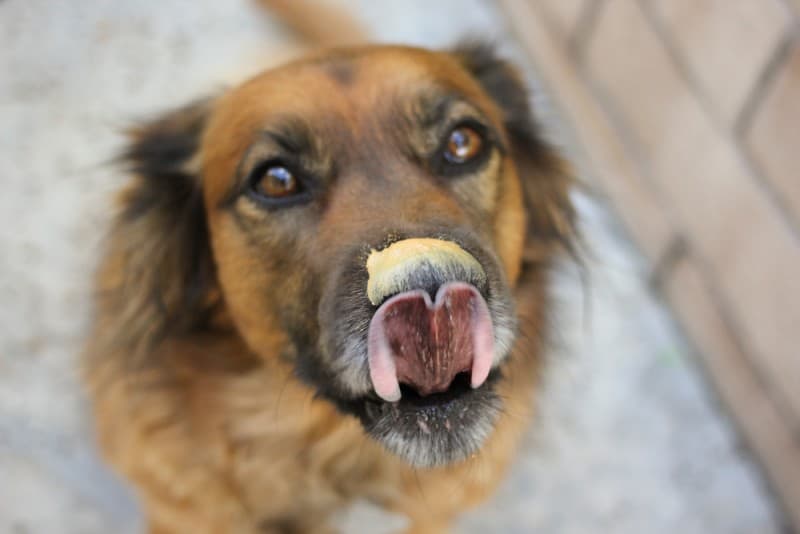 Have you ever been in a situation where you placed a stick of butter on the shelf, looked away for a moment, and turned back to find that it has disappeared?

You’d probably have tons of questions at this moment. But as soon as you look at your dog’s gratifying smile, it all makes sense to you.

Your dog just swallowed a whole stick of butter! So what kind of hell awaits you now?

Fortunately, butter isn’t toxic or even that harmful to dogs. While it certainly is very rich in fat and lactose, it’s only going to cause a bout of diarrhea at most. With good care, your dog’s digestive system will be back to normal in two to three days.

However, for dogs that already suffer from obesity or pancreatitis, the risk is slightly elevated.

So what are the dangers of butter to these types of dogs? And how do you know if your dog needs to be taken to the vet?

Keep on reading to find out!

Is Butter Dangerous For Dogs?

Butter is not dangerous for dogs. It’s not life-threatening or lethal like other foods such as chocolate or xylitol. Small quantities of butter, such as a stick, will usually make their way through your dog’s digestive system without causing significant health damage.

However, this does not mean that it won’t cause any trouble either. Butter is a dairy product and contains lactose. So while a stick won’t compromise their health, it will probably cause a bout of vomiting and diarrhea, depending on how resilient your dog is.

How Dogs React To Butter

Dogs are naturally lactose intolerant. This means that their digestive system is unable to produce lactase, an enzyme that breaks down lactose. And butter being a by-product of milk naturally contains lots of lactose.

When butter enters a dog’s digestive system, the enzymes in their stomach are unable to break it down. Depending on their size, your dog might either immediately vomit out the butter if it’s too much for their digestive system, or it will continue to make its way down.

If your dog doesn’t vomit out the butter, it will cause stomach cramps, bloating, and eventually diarrhea. Your dog will probably pass the butter in the form of loose stools for a day or two. After that, their digestive system should mostly be back on track.

While this is what takes place in the majority of cases, a few dogs will suffer from complications that might require medical attention. These are as following:

Gastroenteritis is an illness that’s usually caused when bacteria or virus enters the digestive system. However, it can also be caused when a dog consumes new food in significant amounts, such as a stick of butter.

It usually leads to inflammation of the intestines and stomach, which results in vomiting and diarrhea. Gastroenteritis typically lasts for a couple of days, during which you need to take special care of your dog’s diet to help them recover quickly.

The pancreas is an organ responsible for the production of insulin and digestive enzymes. When a dog suffers from pancreatitis, the enzymes in the pancreas become active and start digesting the organ itself, causing it to become inflamed.

Pancreatitis in dogs is caused by a poor diet that includes lots of fats over a long period. However, it can also suddenly worsen if a dog consumes a lot of fat in one go, such as eating a stick of butter.

What To Do After A Dog Eats Butter?

If your dog just ate a stick of butter, the first thing you should do is not panic. Butter isn’t toxic or lethal to dogs, and a stick worth usually isn’t enough to cause life-threatening damage to your dog.

After that, assess the situation. Was the butter wrapped or unwrapped? What was the wrapper made out of? Was it regular butter or some other type? Could they have possibly eaten more than a stick?

These are all questions you need to ask yourself and figure out an answer for. This will help you understand the situation better and act accordingly. But normally, it’s best to start by asking yourself these questions in the following order:

Did your dog eat regular or some other kind of butter?

Regular butter is made by churning milk or cream and separating the fat globules from it. Some manufacturers also add food coloring and some salt for taste. The fact is that most brands of butter do not contain any ingredient that is toxic to dogs.

However, if your dog ate some other type of processed butter, you might want to keep your phone nearby. Some brands of butter may add an artificial sweetener called xylitol, which is lethal to canines even in small quantities.

If your dog ate cocoa butter, you should probably contact your vet straight away. Cocoa butter contains theobromine, a compound that causes severe hyperactivity in dogs leading to seizures, tremors, or even a heart attack.

Was the butter wrapped or unwrapped?

While panicking, most people will overlook the fact whether the butter their dog ate was wrapped or unwrapped. In reality, butter is harmless, but it’s the wrapping that can cause problems.

In most cases, the wrapping can pose a choking hazard to dogs. However, if your dog does not seem to be gasping for breath or panicking, you can calm down a bit. Since butter is quite greasy, it can help the wrapper pass through your dog’s digestive system.

But if you have a teacup breed or a tiny dog, the wrapping could cause an intestinal blockage. After consuming butter, most dogs will develop diarrhea. So if your dog isn’t passing loose stools within a couple of hours, it’s best to get them to a vet.

Once you’ve ruled out the possibility of a serious situation, you can begin preparing for what follows. Most dogs will suffer from a bout of diarrhea for a couple of days and may require a special dietary intake. To avoid a major mess in your house and to help your dog get better quickly, follow up with these steps:

1. Don’t give them food for the night

After your dog has eaten a lot of butter, their digestive system will probably be working at near full capacity. Feeding them food will put even more load on their stomach and will worsen the stomach pain and diarrhea.

Thus, it’s best to fast your dog for the remaining day. However, do place fresh water near them as diarrhea can dehydrate their body.

2. Keep them in an enclosed space

The butter that they’ve consumed will probably come out in the form of loose stools within a couple of hours. So, it’s best to keep them in a gated space for the day so that they don’t accidentally soil the house.

Also, make sure that the space you’re enclosing them in is easy to clean. It’s preferred that you cover the floor with newspaper or potty-training pads.

3. Feed them a bland diet for some days

While your dog’s digestive system is trying to process the body, they’ll need food to fuel their body. However, regular dry kibbles will often worsen the situation. Instead, feed them a bland homemade diet for a few days till diarrhea passes.

To make one yourself, take a pound of lean chicken or turkey and a cup of rice, and boil them in two cups of water till they’re well-cooked. Also, add a half cup of plain canned pumpkin to the mixture. Don’t add any sort of spices or flavoring to the food.

You’ll want to feed a cup of this food in the morning and see if the loose stools continue. If they do, feed them another cup in the afternoon. Otherwise, mix half a cup of kibbles with half a cup of the bland diet. Continue to check the situation of diarrhea and return to their regular diet if it disappears.

Which foods are best for dogs with diarrhea?

Sweet potatoes, pumpkin, yogurt, oatmeal, and bananas are all foods that soothe a dog’s stomach and help restore their natural gut flora.

Unlike most dairy products, cheese contains lactose in very minimal amounts. Therefore, it’s safe to feed them cheese in moderation, but regular consumption can cause obesity.

Which ingredients are toxic to dogs?

Ingredients that are toxic to dogs include xylitol, caffeine, chocolate, and alcohol, to name a few. Most over the counter medicines like ibuprofen and naproxen are also lethal to dogs.

Is peanut butter safe for dogs?

Peanut butter is safe for dogs provided it does not contain xylitol. Some brands include xylitol in their peanut butter, which can be lethal to dogs. Therefore, it’s best only to feed them homemade peanut butter.

How do you make your dog vomit?

To make your dog vomit out the butter, you need to feed them 1ml of 3% hydrogen peroxide per pound of body weight. However, it’s best to let a vet do this or be completely familiar with inducing vomiting in a dog before you do so.