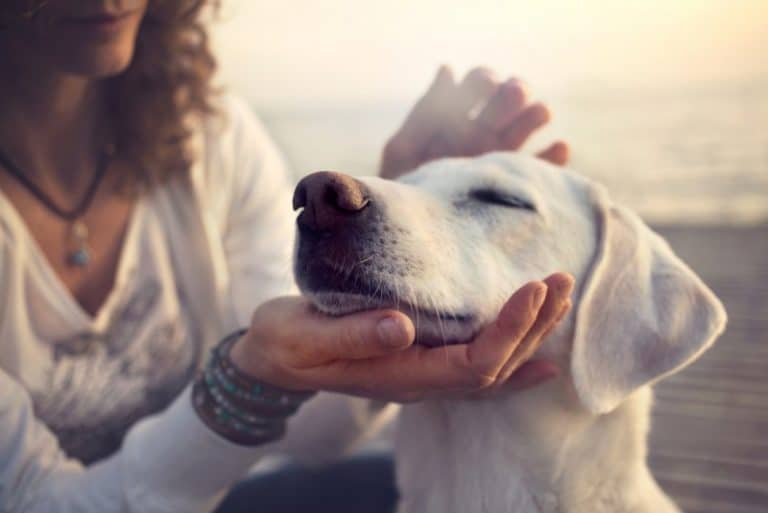 Dogs eat weird things all the time, and most of the time, they’re fine. But if your dog just wolfed down an entire loaf of bread, you might wonder whether you should be worried.

Wheat and white bread aren’t toxic for dogs, and many dogs — especially larger breeds — might be able to eat a whole loaf of bread without experiencing any negative side-effects. However, too much bread can also cause constipation, diarrhea, vomiting, or bloat, and in some cases, may require immediate veterinary intervention.

Figuring out whether or not your dog needs a trip to the vet isn’t always immediately obvious, though. When can you relax, and when should you worry?

Should I Worry If My Dog Ate a Loaf of Bread?

If your dog ate an entire loaf of bread, it’s important to be vigilant, especially for the first 48-72 hours.

Some dogs, particularly larger dogs, can eat a whole loaf of bread without suffering any gastrointestinal issues. If your dog is eating, drinking, and behaving normally, they’re likely not in any danger. Keep a close eye on them for the next few days, but don’t worry too much.

Some dogs, however, can develop symptoms such as constipation, diarrhea, dehydration, or vomiting. An entire loaf of bread would be difficult for many humans to eat; a smaller dog, with its smaller stomach, will have an even harder time. Additionally, because a dog’s digestive system keeps food in the stomach for longer than the human gut does, it takes longer for the dog to digest. Combine that with the high level of air and carbohydrates found in bread, and you have several complicating factors, each of which can lead to discomfort for your poor pup.

If your dog seems uncomfortable, or if they start exhibiting any unusual gastrointestinal symptoms, call your veterinarian. Your vet will ask you questions about your dog’s size, breed, weight, and current symptoms in order to offer a personalized treatment plan. Depending on your dog’s size or symptoms, they may recommend inducing vomiting, withholding food for 24 hours, or keeping them to a regular fluid intake schedule.

In many cases, your dog will be able to recover comfortably at home. However, bloat can lead to gastric dilatation and volvulus (also known as GDV or gastric torsion). GDV is life-threatening, and some dog breeds, such as deep-chested breeds like Great Danes and Irish Setters, are particularly susceptible. If your vet recommends bringing your dog in, do so immediately—and if your vet isn’t open, don’t wait until the next day. Take them to an emergency clinic stat.

Can My Dog Die From Eating a Whole Loaf of Bread?

The unfortunate answer to this question is “yes.” It’s not what’s most likely to happen; as mentioned above, even if your dog does chow down on an entire loaf, they’re more likely to develop mild to moderate symptoms treated relatively easily with your vet’s consultation. However, as mentioned above, bloat can sometimes develop into GDV, and GDV can be deadly.

GDV occurs when the stomach fills with gas to such an extent that it twists in on itself, preventing blood flow to the heart and rest of the body, sending the dog into shock and resulting in heart stoppage. Within hours, a dog can die.

GDV is complex, and veterinarians aren’t quite sure exactly why the stomach twists. We do know that some factors increase a dog’s risk of GDV: deep-chested breeds tend to have a higher risk, for example, as do dogs who only eat one large meal a day and dogs who have a history of GDV in the family.  But because gastric dilatation and volvulus can kill a dog so quickly, suspected cases of GDV require immediate intervention: according to Dr. Jeff Grognet, GDV causes death in 30% of cases, even if the dog is brought promptly to the vet.

Most dogs can eat a whole loaf of bread and recover within days. However, if your dog appears to be in distress or if they’re particularly at risk for developing GDV, take them to a veterinarian immediately; your quick action could save your dog’s life.

Should I Be Worried if My Dog Ate the Plastic Wrapper Around the Bread?

If you know or suspect that your dog also ate the plastic wrapper around a loaf of bread, take them to a vet immediately.

Sometimes, your dog might be able to pass the plastic easily; you may even find some of it in the dog’s stool later. However, swallowing a wrapper can cause a foreign body obstruction: in other words, the wrapper can become stuck somewhere in your dog’s digestive system, which can result in anything from constipation and vomiting to tissue necrosis and death. A foreign body obstruction can not only prevent your dog’s digestive system from working properly but can also restrict blood flow to the rest of the body, and just like GDV, it can be fatal.

If your dog ate plastic—or even if you think there’s a possibility they may have—bring them to the vet. Your veterinarian will likely want to do a physical examination and may also recommend X-rays, blood, and urine tests. If the vet determines that nothing is wrong, they may let your dog go home immediately. In other cases, they may ask your dog to stay for observation for a period of a few hours or days. However, in cases where surgery is warranted, quickly taking your dog to the vet can mean the difference between life and death.

Are Some Types of Bread More Dangerous for Dogs Than Others?

Bread in and of itself isn’t poisonous for dogs, and as mentioned above, many dogs can have a slice or two (or even a loaf) with no long-lasting side-effects. However, some types of bread contain other ingredients that can be extremely dangerous for a dog to ingest. These include, but are not limited to:

Can I feed my adult dog an occasional slice of bread?

You can probably feed your dog a slice of bread now and then: as we mentioned above, bread isn’t inherently toxic to dogs. But limit it to a small, occasional treat, and keep an eye on your dog the first few times you feed them bread to err on the side of caution.

Can I feed my puppy an occasional slice of bread?

No, you should avoid giving puppies bread. Because their stomachs are so small, their digestive systems will have a much harder time handling bread products than an adult dog would.

My dog is drinking a lot after eating bread. Is that normal?

Eating too much bread can make your dog feel dehydrated, so if your dog chows down on an entire loaf, you may find them gulping down whole bowlfuls of water later. Increased water consumption is normal, but be on the lookout for other symptoms as well.

My dog ate a hamburger bun. Will it be okay?

Hamburger buns contain similar ingredients found in most other types of bread, so if your dog eats a single bun, they’ll likely be fine. Again, though, keep an eye on them for the next 48-72 hours just in case.

Pizza crust, like most bread, should be fine for your dog in small, occasional amounts. However, the pizza toppings themselves can be problematic. For example, if your dog just ate a slice of pizza with sliced onion (which, like garlic, is part of the Allium genus), monitor them closely for signs of distress and be ready to take them to the vet if necessary.