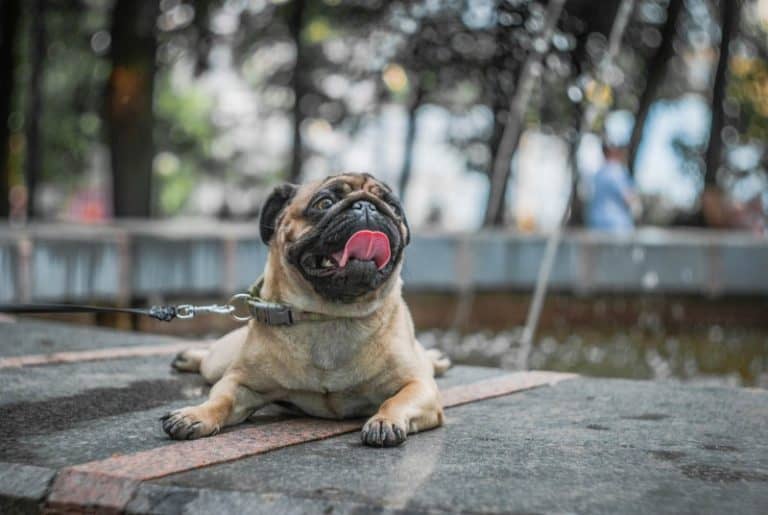 If your dog is drinking unusually large amounts of water, it’s important to understand why.

Although it’s normal for dogs to drink water routinely throughout their waking hours, you should be concerned if your dog is suddenly drinking extreme amounts of water. Dogs need reliable access to freshwater. Expect them to drink more during hot, dry weather or periods when they’re exceptionally physically active, just like us.

But, is it possible for your dog to drink too much water? Yes. Excessive water drinking that persists can indicate one of many health issues, some of which can be serious or even life-threatening.

If your dog is drinking unusually high volumes of water while eating less or no more than usual, here is some information to help you understand why this may be happening. Ultimately, however, you will need to have a veterinarian determine the right action to remedy the problem for your dog.

How Much is Too Much Water for My Dog to Drink?

Most dogs need about an ounce of fluid per pound of body weight each day. Therefore, a dog weighing about 10 pounds needs to drink a little more than a cup of fresh water daily. A very active dog or a lactating dog may need a larger amount. Puppies tend to drink more water than adult dogs.

If your dog is drinking significantly more water than usual, that can indicate a potential health issue. Increased water consumption in any animal is called “polydipsia.” It is a frequently addressed problem in veterinary medicine.

A dog whose water-drinking behavior is extreme enough to become a cause for concern will typically drink much more than usual for a dog of its size, activity levels, and weather conditions. They are constantly thirsty. Suppose your dog is spending an unusual amount of their waking time hovering over the water bowl and drinks insatiably every time you refill the bowl. In that case, this may be a sign of a possible health condition or disease, according to a statement reportedly offered by NYC Animal Medical Center Veterinarian, Dr. Elizabeth Appleman.

If your dog constantly has his/her head in the water bowl, or if your dog is suddenly drinking out of the toilet, or you find that you must refill the water bowl much more frequently than usual, there may be an underlying health issue.

Some dogs in distress due to a serious illness or disease indicated by the onset of the kinds of extreme water drinking behaviors described above will drink so much water so rapidly that they regurgitate it back up immediately. When a dog urinates more frequently than normal, this may also indicate a disease or other health problem.

If your dog is behaving as discussed above, or if you notice any other significant changes in your dog’s behavior or disposition, you should immediately consult with your veterinarian.

Can it Ever Be Normal for A Dog to Drink Extreme Amounts of Water?

When a dog is drinking volumes of water that are not normal for that dog, it may be a sign of a medical issue. But, drinking a lot of water can be normal for some dogs, according to Dr. Appleman. Dogs that may normally drink very large amounts of water are likely to be large-sized breeds and be very energetic and playful. These dogs are physically very active. Therefore they may pant a lot, which is the doggie equivalent of sweating, which means they must replenish the water lost.

If you keep track of how much your dog drinks normally, you are better able to see when a problem arises and inform your veterinarian of the change.

See the section below called “Maintaining Healthy Water Consumption for Your Dog” to learn the simplest way to establish your dog’s water-consumption baseline.

Is Drinking a Lot of Water a Sign of a Canine Disease?

Polydipsia can be due to one of many underlying causes, ranging from exposure to hot weather, especially during the change of seasons, while a dog is physically adjusting to the higher temperatures. Dogs will also attempt to recover water lost through extreme panting, diarrhea, or blood loss. In such circumstances, the dog’s body is trying to rehydrate itself, i.e., to restore its normal volume of blood.

Drinking large amounts of water can indicate one of the several general causes discussed in some detail at the bottom of this section, some of which are not necessarily reasons for pet owners to be concerned.

If your dog isn’t a big water drinker, and there are no external factors like warm weather or an increase in exercise, frequent drinking may indicate a more serious medical issue.

The process of diagnosing the cause of a dog drinking and urinating significantly increased amounts of fluid can be a complicated one, and it can be difficult to determine the actual cause. Possible causes of polydipsia, as well as polyuria (increased urination), include the following, among others:

Here are some typical causes of dogs drinking increased amounts of water:

Feeding a dog a diet entirely consisting of dry food, which can contain amounts of water as low as 5 to 10 percent, can cause your dog to be poorly hydrated and thirsty.

Human foods high in sodium can also cause your dog to drink more water than lower-sodium foods. Large quantities of salt can be poisonous to dogs. So, it’s important to refrain from frequently feeding your dog salty snack foods that you are eating. Symptoms resulting from high-sodium foods can include diarrhea, tremors, vomiting, and depression.

Dogs can become dehydrated when playing or exercising actively in hot weather. Other causes of dehydration include illness or infection, which can require veterinary treatment. As in humans, dehydration in dogs naturally triggers the urge to drink increased amounts of water. In addition to exhibiting extreme thirst, other signs and symptoms of dehydration in a dog can include dry mouth (tongue and gums), thickened saliva, and lethargy.

Dehydration can quickly become life-threatening. If your dog appears to be slightly dehydrated but is not vomiting, try giving it a small amount of water, about one teaspoon for a smaller dog, or 1 to 2 tablespoons for a larger dog at 10-minute intervals for several hours.

Prevent your dog from having access to unlimited amounts of liquids while he or she is dehydrated because drinking too much water too quickly can cause vomiting.

As you can see indicated by the partial list above, numerous medical conditions can lead a dog to drink water excessively. In some cases, however, it is not the medical condition itself that causes a dog to experience extreme thirst and to drink large volumes of water. Sometimes, the medication prescribed to treat an illness or disease can cause a dog to consume larger amounts of water than usual. For examples, excessive thirst can be a side-effect of drug treatments such as these, among others:

If your dog is undergoing treatment including medication for an illness or disease and is exhibiting unquenchable thirst, discuss your dog’s medications and their side effects with your veterinarian. If the treatment drugs are causing the problem of extreme thirst, your vet may be able to reduce the dosage to alleviate your dog’s struggle to take in enough water.

Pet owners who proactively practice monitoring their dogs’ water drinking habits have an advantage in determining the appropriate actions to take if those behaviors change.

It is easier to recognize a significant shift in your dog’s drinking behavior if you establish and maintain this kind of simple routine for managing his/her water bowl:

Dogs are messy drinkers, so it can be hard to estimate how much your dog is drinking and how much is on the floor around the bowl.

Abundant clean, freshwater is, of course, essential for your dog’s health. So, never withhold water in an attempt to regulate your dog’s fluid consumption. If you are concerned that your dog is drinking too much water (or too little water), contact your vet promptly.

What Should I Do If My Dog Keeps Drinking Excessive Amounts of Water?

Many conditions can impact a dog’s water drinking habits. Among these are weather conditions, dietary issues, activity levels, illnesses, and diseases.

Because some of the causes for your dog’s increased thirst can be serious, you may want to consult with your veterinarian.

Fortunately, most diseases in canines with which increased water drinking is associated have treatment options with histories of strong success rates. “The challenge is in arriving at the correct diagnosis,” per Dr. Appleman’s public statement on the topic. As she has reportedly explained, after a diagnosis has been determined, a veterinarian can virtually always reduce a dog’s extreme water consumption and urination, though perhaps not entirely.

Maintaining awareness of how much water your dog drinks daily is the best way to recognize a significant increase. If there is a sudden and unexplained increase in water consumption,  then you should contact your veterinarian. With some standard tests, your vet can determine the cause of your dog’s increased water consumption and guide you through the necessary steps either to remedy the problem on your own or will advise you on medical treatment options, if needed.