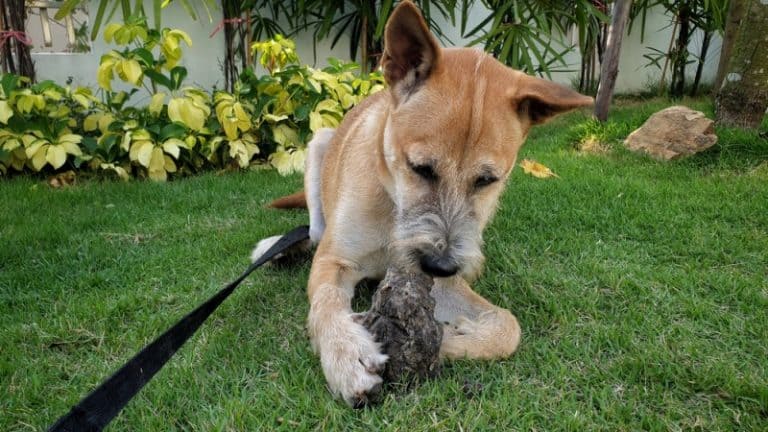 Most dog owners are used to their dog licking and eating random stuff all the time.

However, this habit can turn into a tragic accident if your dog accidentally swallows a rock. And the worst part is that neither you nor your dog will see it coming.

So what should you do if your dog eats a rock? Try to make your dog vomit out the rock within the first two hours. If the rock doesn’t come out, check for symptoms like vomiting, lethargy, loss of appetite, and take your dog to the vet as quickly as possible.

Although your dog will probably live through this dangerous situation, it’s important to ensure that the scenario doesn’t repeat itself.

To find out how, keep on reading ahead!

My dog ate a rock – What should you do?

The first couple of hours after your dog swallows a rock are the most critical. During this period, you need to keep a close eye on their activities and look out for any signs of discomfort.

There are three ways this situation will probably turn out:

An intestinal blockage is the last thing you want but should probably be ready to face as rocks can be hard to expel. In that case, your dog’s life will be at risk, and they will need immediate veterinary attention.

Your priority should be to help your dog vomit out the rock. For two hours after swallowing, the rock will still be in your dog’s stomach and can be drawn out by inducing vomiting. However, we only recommend this step if you feel confident with the procedure. Make sure that you’ve fed your dog a meal of wet or dry food beforehand so that it’s easier for them to barf up the rock.

But if two hours have passed since your dog ate the rock, it’s probably already making its way down the intestines. This is the most critical stage as it’s highly likely that the rock will create some sort of blockage in the intestinal tract. If that does happen, your dog will display the following symptoms:

While the stone is in your dog’s stomach, they will act normally. But once it starts passing through the intestines and gets stuck, your dog’s natural vomiting instincts will kick in to expel the foreign object.

Keep track of how many times your dog is vomiting. A blockage in the intestines can make your dog vomit up to 20 times a day, depending on the size of the rock. Most of the time, they’ll just spew up stomach acid. You have to inspect this vomit with a stick or rod to see if they’ve puked up the rock or not.

2. Refusing to eat or drink

Turning down food and water is a dead giveaway of a major digestive problem. A healthy dog will chow down an entire bowl of food within minutes. But the stomach pain and constant urge to vomit from an intestinal blockage will significantly reduce a dog’s appetite and will to eat or drink.

To test this, leave their food and water out for a couple of hours. You can also try to hand-feed your dog some treats or kibbles. If they refuse to eat or try but vomit it out instantly, there’s a good chance that the rock is blocking your dog’s intestinal tract.

Most owners can tell when their dog seems less energetic than usual. An intestinal blockage can lead to vomiting and even disrupt blood flow to some organs, which can make your dog lethargic and slightly distressed.

If your dog starts feeling low and becomes lethargic a few hours after eating a rock, the rock is probably obstructing their digestive tract.

The presence of just one of the symptoms mentioned above should be enough to prompt you to take your dog to the vet straight away. If left untreated, intestinal obstruction can stop blood flow to surrounding tissues, and in the worst-case scenario, will kill your dog within 3-4 days.

That’s why it’s important to get your dog to the veterinarian as soon as you start noticing any of the three symptoms. A veterinarian will do a full body examination to consider your dog’s health status and then decide to do an X-ray or an endoscopy.

After analyzing the size of the rock and the exact position where it’s stuck, your veterinarian will decide the next course of action. They will either let the rock naturally pass through or conduct a gastrotomy and manually remove the obstruction. This depends on whether the rock is causing a partial or complete obstruction and if it could get stuck later down in the small intestine.

Surgery is often necessary for these situations but mostly has a favorable outcome if the dog is operated on in time. After the procedure, you will have to take your dog for a few post-surgery checkups, and your vet will assign some antibiotics to prevent infections.

Your dog eating a rock is a situation you probably don’t want. Apart from the immense stress the whole scenario causes, the cost of surgery is also likely to put a big dent in your pocket. So how do you stop your dog from eating rocks again? And why do dogs even eat something as distasteful as a rock?

There are only three reasons for this behavior: nutritional, behavioral, and psychological. Here are all of them explained in detail:

A nutrient deficiency from a poor diet can cause dogs to engage in a behavior known as pica. It encourages dogs to eat non-edible items like rocks, as well as cloth, plastic, wood, and other unconventional objects.

This condition is worrying because it can also lead to other life-threatening situations like choking, poisoning, and serious gastrointestinal issues if a dog gets its paws on stuff like medicines or batteries.

Dogs are curious creatures that explore the world with their gifted sense of smell. But sometimes, their nose can misguide them or even land them into trouble. When they smell food on any object while they’re bored, the dog will try to taste or even eat the object out of curiosity.

This is a very dangerous habit to engage in and will encourage your dog to regularly eat potentially hazardous objects. That’s why most dogs that come into veterinary clinics due to intestinal obstruction have multiple rocks in their body that they have consumed over time.

Dogs crave more attention from their owners compared to other pets. Some breeds have a larger appetite for attention, so constantly being ignored or not getting enough socialization can cause them lots of stress, separation anxiety, and frustration.

If they fail to get noticed for too long, your dog will develop pica and start eating unusual items like rock, dirt, and plastic.

How to train your dog not to eat rocks

Fortunately, with some training and reinforcement, you can put an end to your dog’s habit of eating rocks and other dangerous items for good. You will also need to make your home secure for your dog and eliminate all dangerous items they might be tempted to eat. Here are some simple steps you can do to make sure your dog never eats a rock again:

Training of all kinds is essential for dogs. But obedience training particularly can go a long way in saving them from potentially fatal situations. Some basic obedience commands that every dog needs to be familiar with include “stop”, “stay”, “drop”, and “leave it”.

Ideally, a dog should start getting trained and made accustomed to these commands since they’re puppies. But if you missed the window, you can train your dog on your own as well through persistency and some effort.

Whenever your dog misbehaves, command them and see if they comply. If they do, give them appreciation through verbal praises or some treats. This way, whenever your dog puts a rock or some other dangerous object in their mouth, they’ll simply drop it on your order.

Remember not to shout or command your dog very harshly. If they get afraid and they already have a rock in their mouth, they’re more likely to swallow it rather than dropping it. Once they empty their mouth, lure them in with a toy or their favorite treat.

2. Remove all stones and rocks around your house

The simplest way to prevent your dog from eating a rock is to get rid of all the stones around your house or limit your dog’s access to them.

This includes all decorative stones and small pebbles in your house and the yard. If that’s not possible, attach some protective mesh over them so your dog can’t put them in their mouth.

3. Give your dog plenty of toys and activities

Since boredom is a major reason why dogs eat stones, it’s important to keep them stimulated and occupied throughout their day. Provide lots of chewing toys and interactive puzzles to your dog so they remain mentally challenged and can reduce their stress and anxiety by gnawing on the chewing toys instead.

If your dog is prone to separation anxiety, make sure they have someone to accompany them while you’re not at home. You can choose to do this through toys, but it’s better to hire a dog sitter or buy another pet your dog can play with in the long-term.

How long does it take for rocks to pass through dogs?

Anything that enters a dog’s digestive system takes between 10-24 hours to pass through fully. But if it takes longer than a day and your dog becomes lethargic, chances are that the rock has become stuck in their intestines.

Can dogs poop with obstructed intestines?

No, intestinal obstruction can seriously impact a dog’s bowel movement as it doesn’t let anything pass through. So, your dog might develop diarrhea or might not poop at all if several days have passed since the obstruction formed.

How long can a dog survive with intestinal blockage?

How much does surgery to remove rocks from a dog cost?

Most veterinary clinics charge anywhere between $200 to $900 for a normal gastrotomy to remove rocks from the intestines. If the case is critical and the rock is stuck in a difficult place, the costs can even soar up to $1,800.

Can a bowel obstruction in dogs clear on its own?

If the rock is small in size and is only partially blocking the intestines, the obstruction can clear on its own. However, this decision should only be conducted by a veterinarian after proper testing.