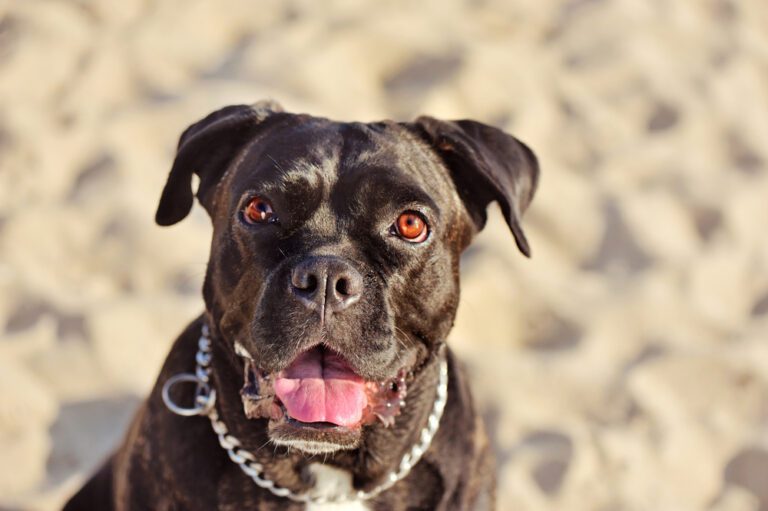 Like its hair color, the color of your dog’s nose is determined by genetics, and it can change colors for a few different reasons.

If your dog’s nose has pink spots, you should not be concerned unless a few other symptoms accompany the discoloration, including a texture change, crusting, cracks, bleeding, sores, or it appears in conjunction with discoloration on other parts of the face.

We will discuss the cause of nose discoloration and treatments to help you fix up your dog’s nose. We will also cover issues that may require a vet visit and how you can spot them.

What causes pink spots on a dog’s nose?

The most common reason a dog’s nose turns pink is called a winter nose or snow nose. Snow nose is common in colder climates in winter but can happen to a dog any time of the year.

There is no treatment for snow nose, and it often reverses itself as the weather improves.

It is believed that snow nose happens to a dog because days get shorter, and they produce less melanin. Snow nose is more common in lighter dogs or breeds like the Bernese Mountain Dog, Retrievers, Shepherds, and Huskies.

Snow Nose is the likely culprit if your dog’s pink spots do not come with any other symptoms. Your dog’s nose should go back to normal as the weather improves.

Another common reason a dog’s nose starts getting pink spots is age.

At 8 to 12 weeks of age, a puppy’s nose becomes the color it will be for the rest of its life.

Before 12 weeks, a puppy can have pink spots or an entirely pink nose. On the opposite end of the age spectrum, an older dog can lose melanin and start to lose color on its nose.

If your dog’s pink spots start to show up slowly over a long period of time after the age of 6 or 7, your dog may be losing melanin. If you have a Labrador and the nose is changing color, it is called Dudley Nose.

A scratch on your dog’s nose will temporarily turn pink as it heals.

If your dog’s nose looks like it was scratched or cut recently, then the pink spot is likely a healing skin trauma. The skin on the nose turns bright pink as it works to heal itself. The nose should go back to normal unless a scar forms.

A common reason the nose and lips may start to turn pink is allergies.

Dogs can be allergic to certain types of plastic. If you have changed your dog’s food bowl or not washed it well in the past few weeks, nose discoloration can be from an allergen. If the pink goes away by switching your dog to a metal bowl, it is likely a plastic allergy.

Less common issues that may cause pink spots on your dog’s nose include:

If your dog has any secondary symptoms like cracks, pus, or bleeding, it is best to see a vet to determine the cause of the pink spots on your dog’s nose.

How do I protect my dog’s pink nose?

To protect your dog’s nose from the sun when it turns pink, you can use dog-safe sunscreen or a dog-safe nose balm. Your dog does not need daily protection when its nose is black or liver-colored. When the nose has pink spots, it is more prone to sunburn and may need a little extra attention.

Can you prevent your dog from getting Snow Nose?

You cannot prevent a dog from getting Snow Nose. Your dog can also get Snow Nose in the summer. The likely culprit is a decrease in melanin. Sometimes this decrease is linked to the weather, but that is not always the case.

There are options for you to improve melanin and enzyme production in your dog. Talk to your vet about adding in vitamins or minerals if you wish.

Snow Nose does not affect your dog’s health. It is purely cosmetic.

How will I know if my dog’s pink spots are not a common issue?

It is hard to know for sure without a vet visit what is going on in your dog’s nose. A few signs will help you determine if your dog’s nose needs to see a specialist.

The texture of your dog’s nose will help you determine if you should speak to your vet. The texture becoming sleek or increasing in roughness is cause to speak with your vet. These are signs there may be something more going on.

Other signs your dog’s pink spots may need help with include pus, cracking, or bleeding. If your dog is older and the nose becomes rougher, it is not uncommon, and a simple balm can fix this. It is less common for the roughness and discoloration to accompany cracking and bleeding.

What is Vitiligo in dogs?

Vitiligo in dogs is simply a loss in pigmentation that can happen anywhere on the body. Vitiligo starts at a young age and can happen because of the dog’s breed, an autoimmune disease, a stressor, or genetics.

Vitiligo is a loss in skin color pigmentation because the body is attacking melanocytes. It starts commonly in the face and can affect cats and dogs anywhere on their body.

There are two types of vitiligo: focal and generalized. Focal vitiligo is often associated with Snow Nose and affects the dog in only one area (commonly the nose or face). General vitiligo can show up anywhere on the dog’s body.

There is currently no treatment for vitiligo. Vitiligo will rarely harm your dog. If you see signs of cracking, bleeding, or pus, it is best to see a vet as there may be other underlying issues.

Frequently asked questions about pink spots on a dogs nose

Why are your dog’s lips turning pink?

The most common cause for the black areas of a dog’s face to turn pink is vitiligo. Lips can also turn pink from allergies.

What is Nasal Dermatosis?

A dog’s nose is called the nasal planum.

Diseases that affect on or around your dog’s nose are called nasal dermatosis.

What does a pink bump on your dog’s nose mean?

The most common reason a dog has a pink lump is due to nasal polyps. The cause of polyps is unknown, and your dog may have other underlying issues.

How do you know if your dog has mites?

Signs of mites include intense itching with the pairing of scaling or flaky skin. Dogs can get nasal mites, but symptoms include nose bleeding and sneezing more commonly than discoloration.

What are common symptoms of Discoid lupus and Pemphigus?

Discoid lupus and pemphigus are common dog diseases that have symptoms linked to a dog’s nose. Common symptoms of these diseases would include scaly or crusty wounds around the face.