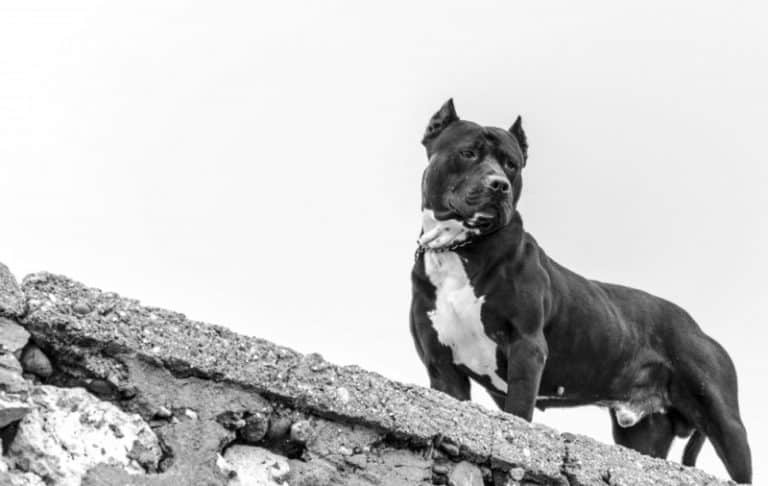 Surprisingly, we are still speaking about a practice that seems medieval.  Ear cropping is painful and considered inhumane by many, but it is still very much in practice. Old dogma deemed ita necessary procedure on some breeds to protect them during fights, improve their hearing, and even prevent infections. These archaic reasons have long since been disproven. The dogfighting that required such painful procedures has long been illegal; still, the practice continues.

A Pitbull with cropped ears looks more ferocious and aggressive, leading to a more distorted image of a breed that already has a pretty bad reputation for aggression. This practice is not just popular with Pitbulls but also with several other breeds, including Dobermans, Schnauzers, Great Danes, Cane Corsos, and Boxers, among others.

There is no scientific evidence that if you clip a Pitbull’s ears, it helps with their hearing or provides protection against infections. But unfortunately, some still believe it does.

Pitbulls have drop ears similar to those of Labradors and Greyhound. They have rosebud shaped ears with an upward curl in, which is called the cartilage. This cartilage is lifted a little at the folded flap giving them an inquisitive look. As a pitbull grows from a puppy to an adult, these oversized ears become more proportional to the rest of their body. They form a more erect position with a little curl at the top.

Of course, the shape varies from one pitbull to another. Some Pitbulls may have firmer ears, while others may have floppier ears. One thing common between all dogs is the pinna,the flap on the ear that consists of the cartilage covered with smooth skin.

With ear cropping, the pinna is removed so that the cartilage can have a more erect appearance.

What Exactly is Dog Ear Cropping?

Up to2/3rd  of the ear of some breeds, including Pitbulls’ is cropped off for aesthetic and other misinformed medical purposes. This procedure is carried out on puppies between 7 to 12 weeks old, while the cartilage is still soft. Doing this surgery after the puppy is more than 12 weeks old proposes more serious threats and a lot more pain and a longer recovery process. Doing it later would also minimize the chances of keeping the ears erect post-surgery.

This almost 40-minute surgery under full anesthesia incurs aweeks-long recovery process. Post-surgery, the ears are bandaged and sutured at the edges. The ears are taped to make them more upright. This surgery is called cosmetic otoplasty.

Pitbulls have a lot of nerve endings in their ears, causing their ears to become extremely sensitive to the touch post-surgery. Surprisingly, this procedure is not taught in veterinary schools, which means that vets performing this surgery learn about this on the job, increasing the risks associated with carrying out this procedure.

Why People Crop Off Pitbulls Ears?

If it’s this risky, then why does anyone do it in the first place? There are multiple reasons and misinformation that has led to this inhumane practice. Following are some common reasons why people clip a Pitbull’s ears:

To Protect During Dog Fights

Pitbull ear cropping was common in animals used for hunting or fighting to minimize the risk of injury to the ears during fights. Ears were considered easy targets for the dog’s opponent. Since dog-fighting is illegal in most parts of the world, it is beyond understanding why the practice is still prevalent in breeds that once took part in hunting animals or fighting.

Another common misconception was that cropping ears could limit the chances of infections in some breeds. It was believed that dogs with floppy ears have higher chances of infections since they retain more moisture and, as a result, were more prone to infection.  But according to a report published in FETCH, 80 percent of dogs don’t get ear infections, and more to the point, the shape of the ear is in no way a contributing factor.

It was also believed that cropping could improve hearing in working dogs. The droopy ears might prevent sound waves from efficiently reaching the eardrums. They reasoned that erect ears allow sound waves an unobstructed path to the ear canal, improving hearing directly, allowing Pitbulls to be more aware of predators.

There is very little evidence to prove this. And even if true, the improvement in hearing wouldn’t be any better than a woman pulling her hair back behind her ears. The difference in both these cases is very insignificant.

It is a Standard for Specific Breeds

Breed Standards are one of the primary reasons for this surgery. Health and medical benefits are only often a rouse for aesthetics. Appealing to humans is more important than functionality.

Ear cropping has become a standard for specific breeds; generally, many believe that breeds should look a particular way to meet our expectations. For instance, a boxer is not accepted as a boxer if their ears are not cropped. This unquestioned mindset leads to dog-owners believing that this procedure is necessary for their pet’s interests, instead of their own.

It is a Requirement for Some Dog Shows

Many pet owners who want to participate in dog shows and contests are forced to get this procedure done to ‘meet standards’ and increase their chances of winning. Thankfully, this trend is gradually changing, with many mixed-breed or All-American dogs participating in dog shows. But until recently, certain breeds like the Pitbull were not allowed to contest or had little to no chances of winning if their ears weren’t cropped.

What are the Benefits of Cropping a Dog’s Ears?

There are no apparent benefits of cropping a Pitbull’s ears. All the misconceptions have been debunked; now, it is just a matter of spreading awareness against this hurtful practice that has led many dog owners to believe that it is necessary for their pet’s interests. Dogfighting is illegal anyway, so any danger during combat is an unnecessary argument. The argument against the risk of infection of improved hearing is invalidated.

The only reasonable excuses left are personal dog owner’s choice and for looking at it as a standard for specific breeds. Well, we set the standards. It is worth asking ourselves whether the pain and risk of this unnecessary procedure are worth aesthetics that are for our benefit, not the dogs.

Is It Cruel to Crop a Dog’s Ears?

Some people think it is a cruel practice, and some don’t. But before you make up your mind, you should consider the reason against it:

The Surgery is Not Taught Anywhere

The surgery required for this procedure is not learned in veterinary schools, which means that many vets performing this surgery have learned on the job without the aid of qualified teaching. Because of this, the risks of the surgery increase.

Going through such a painful experience for weeks can be traumatic for many dogs. Animals, just like humans, deal with trauma in different ways. Dogs can become more aggressive or reclusive in light of this experience.

Increases the Risk of Infections

Ironically, cropping a Pitbull’s ears can make him more vulnerable to infections, not less. Since it takes weeks and sometimes even months for the ear to fully recover, the ear remains prone to infection.

Dogs Use Their Tails and Ears to Communicate

Communication is a primary concern of animal activists for putting a stop to this practice. Dogs use their ears to communicate with other dogs and their owners. For instance, dogs move their ears slightly forward to signal that they are becoming alert or edgy. Letting their ears down is a sign of submission and acceptance. When ears are cropped, dogs lose their ability to signal their mood and intentions, robbing them of their full capacity to communicate. Cropping not only affects their ability to “speak,” it means that other dogs may misinterpret their posture.

Pitbulls specifically have many nerve endings in the cartilage. When the ears are cropped, these nerve endings become more sensitive. This procedure is painful enough that the puppy is kept on painkillers for days. Even so, a slight touch or bump could trigger pain in those nerve endings. This sensitivity may never heal in many puppies leading to continuous pain and discomfort through a dog’s life.

Pitbulls With Cropped Ears Are Considered Aggressive and Dangerous

Dogs with their ears cropped are often considered aggressive and dangerous because, for the longest time, it was a sign of a dog that had trained for fighting. Because of this, people are generally reluctant to pet them or even go close to them.

Is the Dog Ear Cropping Illegal?

Fortunately, because of the exposure and voicing of concerns against dog cropping, this practice is becoming less and less common. More and more organizations, vets, pet owners, and laws have taken steps to eliminate this practice,but a lot still needs to be done. Here’s a breakdown of stances of different organizations and countries on pitbull ear cropping.

The American Kennel Club and the Canadian Kennel Clubs permit the practice of ear cropping. The AKC official statement on the matter cites it as ‘acceptable practices integral to defining and preserving breed character and enhancing good health. But they continue to get a lot of backlash for their support. The American Veterinary Medical Association, for instance, strongly opposes such practices. Others, like the American Humane Association, have mixed feelings. They oppose the practice until it is medically necessary and conducted by a licensed veterinarian.

Many states in the US have attempted to ban ear-cropping but have met with strong opposition. Some provinces in Canada have banned the practice, while in others, it is still permissible under strict guidelines. Ear cropping is banned in most parts of Europe as well as Australia.

More and more veterinarians are becoming opposed to this practice and refuse to conduct ear cropping surgeries when requested.

There needs to be a lot of awareness regarding the pain and risks of ear cropping and to educate pet owners and the general public about the needlessness of this practice for medical purposes.

Soon after the surgery, the cropped ears are taped up to hold them in place. The process is carried out to keep the ears erect and in the best shape. Often, the taping is done for up to a year to keep them more erect. Unfortunately, this could be very painful and discomforting for your Pitbull. Taping the ears soon after removing a part of it can cause a lot of pain. It is also sometimes considered more uncomfortable than the surgery itself.

Is It Appropriate to Crop Your Pitties Ears?

As discussed, it is an extremely unnecessary practice that is painful. Unfortunately, some people are not aware of the pain and consequences involved in the procedure. Therefore, it is very important to be more informed before you get a Pitbull or if you’re considering the ear cropping surgery for your pet. There could be a lot of arguments in favor of ear cropping for Pitbulls and other breeds and even animals, but it is a practice that’s against nature and should be avoided.

Fortunately, because of awareness and campaigns, there is a gradual decline in this practice all around the world, but a lot more needs to be done.