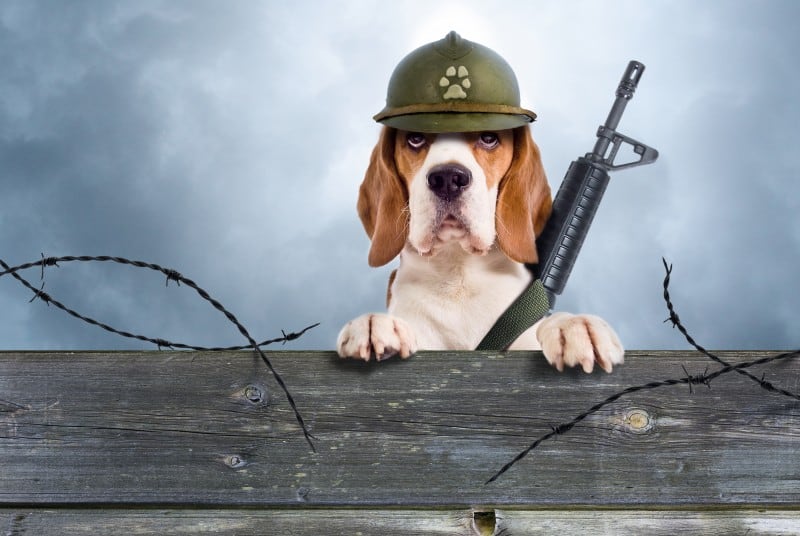 There are two kinds of dog lovers in this world…

Those who like cute and adorable doggos, and those who love strong and intimidating beasts.

These attributes, however, are just a small aspect of any dog’s personality. Some of the cutest dogs are also the toughest, and some of the most intimidating looking dogs are actually quite affectionate.

It is good to keep these personality traits in mind when choosing a name for your dogs.

If you have a tough ball of fluff, we have more than 300 tough dog names to consider for your pal.

Now you know our top favorite tough dog names. There are hundreds more from where these come from -but before we jump on to our extensive and comprehensive list of tough dog names, let’s see what we actually mean by a tough dog.

What Is a Tough Dog?

The term ‘tough dog’ is usually used for dogs that belong to a stronger breed. These dogs have a better power and weight ratio. They are muscular, energetic, and powerful – and you can tell that just by looking at them.

What’s interesting is that these tough dogs don’t always belong to large or very large breeds. Some medium sized dogs are also considered strong and tough because of their exceptional physical capabilities.

Due to strength, power, and stamina, tough breeds generally have a history of being man’s most trusted friend for centuries. They were traditionally utilized as hunting, fishing, farming, or herding companions. Most of them make for a perfect guard dog, and are still used for that purpose.

In short, tough dog breeds are the epitome of canine capabilities. Let’s take a look at some of the toughest, strongest dog breeds.

Speaking of strong, agile, and smart dogs, there are easily around twenty to thirty breeds that can fit the bill. When it comes to popular ones, however, there are around five to seven breeds that are preferred all over the world.

Here are the top seven toughest dogs in the world:

If you have ever been to the countryside, you know that a shepherd’s job is not an easy one. Imagine how tough the job would’ve been centuries ago. That is when humans decided to put dogs to this duty. And that is the origin of this amazing herding breed.

With athletic build, gorgeous coat, and intelligent eyes, German Shepherd is one of the most handsome dogs around. Today, they have earned repute as proficient police and military dogs.

Have you ever seen a Husky pull a heavy sled like it’s no big deal? That is exactly why they are on this list. They have the stamina and endurance to do all that work in extreme cold and on the roughest terrains. They can drag the weight for hours without break.

While their mesmerizing coat is simply nature’s way of keeping them warm, it makes them one of the most sought-after breeds. And it also makes them look like a wolf.

Their sweet and charming personality may have earned them the ‘Gentle Giants’ nickname, but it doesn’t mean they aren’t tough. Originally bred for hunting wild boars, Great Danes are both strong and smart. That is why they are now recognized as highly reliable guard dogs.

Great Danes have lean athletic build and the distinctive floppy hair. Due to their calm nature, they can be a perfect family dog.

Rottweilers have a rich history. Over the centuries, they have been used as security dogs, cart pulling dogs, and herding dogs for large animals. To date, they aren’t considered the best choice for homes with kids or the elderly. They may also threaten other animals in the house.

Due to their tough nature, they are commonly preferred as guard dogs for high security places.

Doberman Pinschers give the impression of a dog that is always alert and ready to pounce. That is actually quite true. It is also the reason they were designated as the official dog for Marine Corps during the World War II.

Doberman have the perfect chiseled body that says a lot about their strength. endurance, and athletic abilities. They are still used by the police and military forces around the world.

Many believe that the Mastiffs lost their charm because of the American Pitbull Terriers. The latter is definitely preferred over its parent breed because it has both strength and agility. This breed is so tough that it is actually banned in several countries.

However, that doesn’t Pitties are dangerous dogs. You just need to train them well to utilize their strength to your advantage.

Alaskan Malamute are slightly smaller than a Husky, but equally tough. Their bodies are more muscular than their Alaskan cousins and that is because their role was never limited to sledge pulling. They have always been the hunters. They are strong dogs with sharp sense of smell and the vision to see clearly in the snow.

Saint Bernard may have earned its reputation as perfect family dog. It does look like a large fluffy toy, but it is one of the toughest dogs for a tough job. It is a breed that is trained and utilized for rescue missions in the snow. This breed has saved many travelers stuck in avalanches in the Alps.

Kangal originates from Turkey, and was traditionally used as a herding dog. Its physique is slightly different from that of other strong dogs. Even the muzzle has a distinct shape that allows them to bite with immense force of 743 PSI – the strongest bite in the canine Kingdom. Overall, Kangals are known as fierce as well as fearless dogs that are equally loyal.

These Ridgebacks are from Rhodesia, Africa. Interestingly, they have a history of fighting off the most dangerous predators such as lions – and hence, the nickname ‘African Lion Hound’.

Rhodesian Ridgebacks have extremely protective nature and make for a perfect guard dog. These dogs have a temperament as strong as their bodies, which makes them a ‘tough’ dog in every sense of the word.

Picking a perfect name for your tough dog is…well…tough, to say the least.

You need a name that goes with your pet’s personality as well as its looks. However, looks are sometimes deceiving, and that is where it can get confusing.

Here’s how it is:

Aside from the aforementioned strong breeds, there are many smaller dogs with a tough temperament. Believe it or not, Jack Russell, French Bulldogs, and Chihuahua are perfect examples of such dogs. People often choose tough dogs names for these little fluffy toughies – and that is an extremly cute contrast

Ultimately, it boils down to your doggo’s personality and temperament. Add to it a little bit of your own personality and you have the perfect tough dog name. Similarly, movie fanatics can name their pets after a tough movie character.

Other names you can choose for your badass doggo are words that have strong or powerful meaning. And then we have words that simple sound tough.

Now, let’s get down to the ultimate list of tough dog names, broken down in different categories for your convenience.

If you believe that your dog’s strength is almost divine, then it makes sense to name them after deities and heroes. Mythology – Norse, Roman, Greek, or Egyptian – is full of brave and powerful characters. Even the gorgeous goddesses responsible for things like beauty and flowers tend to be ruthless and fierce crossed.

We have mentioned a few of our favorite mythology inspired tough dog names  in our top ten list, but there are a lot more:

From comics to movies, the fictional world is full of tough characters. Interestingly, many of those characters have names inspired by mythology. For instance, Marvel Comics are full of characters that are actually Norse gods and goddesses. Most of those names are already covered in previous lists.

However, Hollywood movies are full of inspiring tough male and female characters from whom you can borrow your fur baby’s name:

Reality is sometimes more fascinating than fiction. And some real life heroes can actually make all your fictional and mythical heroes look like amateur. The world has seem some of the strongest leaders, most feared fighters, and bravest adventurers. You can name your four-legged toughie after these legends:

When naming your dog after characters or people, you have the liberty to pick the first name or the last name, depending on which one is easily recognizable. If you are confused, you can go for the complete name as well.

John Wick and Amelia Earhart are great examples of names that sound more badass when used this way.

There are many other dog names that sound tough for one reason of another. Some of these are names associated with military machines while some are just words describe strength, endurance, and power.

Not always. Most tough breeds are the ones with a history of serving as a man’s companion in the field. Loyalty runs in their blood and they usually have friendly, helpful nature.

Are tough dogs difficult to train?

No. Since tough and stronger dogs belong to farming or hunting breeds, they are more responsive to training. They have the mental sharpness and physical agility to train without trouble.

Can I name my dog after another animal?

Yes, it is a common practice to name your dog after another animal due to a similar trait such as strength and agility. Many people name their tough dogs Rhino or Tiger as an ode to their fierceness.

How do dogs learn their names?

Dogs learn their name just like they learn any other command. They condition themselves to respond to you calling their name. They are most likely to understand it as a command to stop what they are doing and pay attention to you.