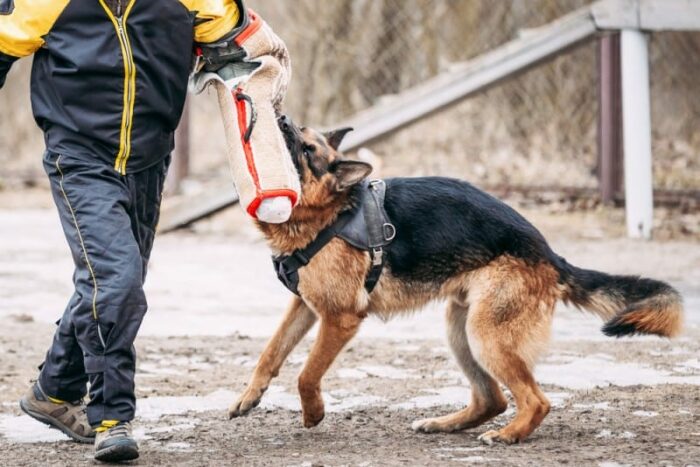 What does it mean if your dog is looking around frantically, pacing agitatedly through the house for no apparent reason? Below are some of the potential answers to what may be causing this odd behavior.

Dogs can exhibit strange behaviors sometimes. They often leave people without a clue about why they’re acting as they do. If your dog is looking around frantically, there are numerous possible causes for that behavior.

Something may have simply startled or frightened your dog, or just excited him. Or, he may be feeling nausea or other canine symptoms of illness. Some of these cause are harmless, while others may require a veterinary examination.

What are the most common of the many reasons why a dog may persist in looking around agitatedly for no apparent reason? Below are explanations of some of the most likely causes of a dog looking around frantically.

First Clues to Why Your Dog is Looking Around Frantically

There are many common reasons for a dog staring at nothing or anxiously looking around for no apparent purpose. If the behavioral change is recent and persistent, first try removing any new sources of smells, sounds, or other potential stimuli that may be causing the confused behavior.

To further narrow the range of potential causes, first note any additional changes in eating, drinking, sleeping, playing habits, etc., that accompany the frantic looking around. Also, consider the overall canine body language your dog has been exhibiting at times throughout the days since the frantic behavior began.

Especially notice the white area of the eyes (sclera) and the degree of intensity in your dog’s gaze.

If you do not find a solution through this effort, then you should discuss your concern with your veterinarian as soon as possible, to make sure there are no serious medical issues.

Most Common Causes of a Dog Looking Around Frantically

Here are some of the most common potential causes of a dog looking around frantically:

Domestic pet dogs  may be fearless in the face of wild animals. But, sometimes the same dogs display fear of non-threatening things that are unfamiliar to them. Indicators of fear including tucking the tail between the legs, lowering the ears and/or the head and shoulders while slowing creeping away, trembling or shivering and cowering in place, or whimpering.

If your dog is demonstrating any of these behaviors while frantically looking around, he/she may be searching for an escape route, or just trying to process the situation and figure out a response to it. Among the most common causes of dogs looking around frantically is fear response. Examples of obscure sources of fear include:

Other common causes of dogs frantically looking around include changes in their environment that can cause dogs to feel anxious or stressed, for example, moving to a new home, or having a new person or pet animal enter into their territory. To help reduce stress for your dog in such situations, try surrounding her/him with familiar toys and other items. Monitor your dog’s actions in the changed environment, and frequently reward good behavior, to help promote adaptation.

Dogs can suffer from this disorder after being subjected to physical abuse, neglect of needs, or lack of socialization at a previous home. This problem is more common among rescue dogs, who may have developed idiosyncratic coping or self-protective habits. One manifestation of OCD in dogs may be looking around frenetically, which may demonstrate a sense of insecurity about the stability of his or her environment. It may take time, and abundant attention and reassurance to help your dog adapt.

Because a dog’s ears have incomparably greater sensitivity to sound than a human’s, they can hear sounds from much greater distances, and they can hear at a much wider range of frequencies than people. If you can’t find another source of your dog’s looking and walking around frantically, as mentioned above, he/she may be reacting to an unfamiliar sound coming from beyond your property.

As dogs age, changes in mental and physical health, and in behavior may occur. If your dog acts strangely, such as looking around anxiously, onset canine cognitive dysfunction (dog dementia) may be the cause. Look for other signs of dementia. Dogs with shorter lifespan age faster and therefore may show earlier signs of aging, such as frantic or restless behavior. Exercising a dog’s mind with toys and interaction can help. Take an older dog for a vet exam and advice regarding the behavioral change(s).

Nystagmus (unintentional eye movement) can be the cause of a dog looking around frantically, exhibiting either a slow or jerking motion of the eyes. This is a natural effect of aging in many dogs. See the U.S. NLM published study of nystagmus for symptoms that may accompany the odd behavior of anxiously looking around. In some rare instances, nystagmus may be due to infection of the ear or brain. Or, it may be due to seizure, or to epilepsy. Consult with your vet regarding causes and treatment.

Like humans, dogs can have floaters (Asteroid Hyalosis ) in the dense fluid that fills the eye. Floaters are errant strands of the vitreous gel-like substance of the eye that stick together and cast tiny shadows on the retina. This organic matter appears to be drifting like gray spots, strings, or cobweb shapes suspended in or drifting across the person’s or dog’s field of vision. Floaters are common with aging in humans and dogs. These can be distracting to dogs and may cause them to try to look around agitatedly or curiously, as they’re attempting to keep up visually with the floaters.

Fly-Snapping (also called Fly-Biting Syndrome) is a rare canine medical condition. If a dog is staring into space, looking around or upward and suddenly snapping at the air as if trying to bite a fly, this may be a symptom of the syndrome. Instances of this frenetic behavior can be infrequent or continuous. Studies of Fly-Snapping Syndrome have yielded multiple potential explanations ranging from gastrointestinal disorders, to neurological conditions, such as seizures or epilepsy, to obsessive-compulsive issues. If your dog exhibits behaviors matching this description, consult your vet for help as soon as possible, as the underlying health condition can worsen beyond control.

A impact to the head by a solid object can disrupt a dog’s brain circuitry, resulting in loss of balance, coordination, onset nystagmus, and other symptoms. If your dog has sustained a brain injury and is looking around frantically, and/or displaying other odd behaviors, or head trauma symptoms, you must take your dog to a veterinarian urgently for diagnosis and treatment, in order to help prevent potentially permanent brain damage and loss of mental and/or physical functioning.

If your dog acts like he sees something or is looking around in a frantic manner, he may be suffering from an hallucination, due to seizures or epilepsy, or one of many other cause. If you suspect that your dog’s unusual behavior is due to a medical condition, consult with your veterinarian promptly. Prepare for your dog’s vet visit with as many details as possible of incidents of your dog looking around frantically and other odd behaviors, to help your vet determine whether or not there is a medical condition causing hallucinations in your dog.

A temporary abnormality in the brain’s functioning can bring on single-event seizures in dogs. Epilepsy is a series of seizures. Dogs who experience idiopathic seizures (random seizures with unknown causes) may be associated with odd behaviors, including wandering around confusedly. Contact your veterinarian for direction. Record the date, time, environment, and other details of the event, including any potential stimuli, to help the vet determine appropriate treatment.

Dogs are known to eat all kinds of things they find that are not healthy for them. Even drugs made for humans, like cold medications, sleep aids, appetite stimulants, etc. may be consumed by your dog, if they are accessible to her/him. Dogs metabolize drugs differently than humans. For example, ingesting a drug like marijuana, which contains THC, a psychoactive agent, may cause your dog to look around frantically and exhibit other signs of drug intoxication. If your dog may have ingested a drug and is acting oddly, contact your vet urgently for guidance on appropriate treatment.

Vestibular disease, canine idiopathic vestibular syndrome, manifests in a sudden disturbance of equilibrium that does not progress to worse impacts on sense of balance. Looking around frantically can be due to this condition. It is more common in older dogs that are suffering from senility. Nystagmus can be associated with this disease. There are numerous forms of vestibular disease, and they can impact the brain stem, ears, and various other areas of a dog’s body.

What to Do if Your Dog is Looking Around Frantically

If you find your dog staring at nothing, looking around frantically, snapping at imaginary objects, pacing, wandering around aimlessly, or exhibiting other unusual behaviors, the change may be due to any one of a number of ordinary causes, such as simply smelling or hearing something unrecognized or becoming startled by a noise you can’t hear. At the other end of the causal spectrum, your dog may be experiencing the onset of a medical condition that might require urgent medical attention.

If your dog’s behavior changes suddenly, especially if his or her odd new actions are increasing or repetitive, monitor and provide all the details you can to your veterinarian. This information can help her/him differentiate between signs and symptoms of a neurologic condition involving the central nervous system, neuropathic pain syndromes, disorders affecting the senses, or other medical issues.